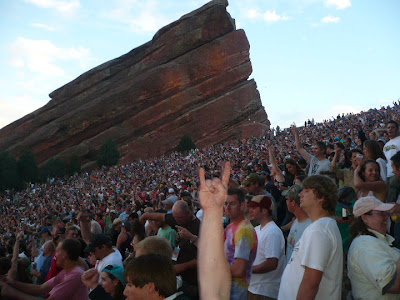 I woke up relatively early on Saturday morning - about 10am - because my phone kept ringing. Friends who were still up from the night before needed me to come over and continue the party. I went over to the house we have dubbed "Shennaniganz" where we proceeded to drink mimosas and have a phish dance party in the front yard underneath an easy up. It was like a Telluride Bluegrass Festival campsite complete with a rug and second hand couches and chairs.

We watched the disappointing but intense end of the USA/Ghana World Cup soccer match and I had a perfect buzz going as I headed over to Cervantes for the second boarding of the Party Bus at 3pm. After the disaster of the Party Bus ride from the night before I was determined not to make the same mistake twice. I interviewed the bus driver. He knew how to get there, the air conditioning worked, and the bus had a iPod input for music. Perfect.

The ride to Red Rocks was much more fun with music, I played the Party Bus Mixes I posted last week. The girls were dancing in the aisles and it was a fun atmosphere, the way a party bus is supposed to be.

The lot scene for Panic this year was fairly disappointing. I spotted groups of undercover cops in unmarked Nissan Xterras driving through the lots and looking at everyone with a suspicious eye. Around 5:30pm some wind and rain moved in, a light shower for about 30 minutes. I sat in the party bus, drank and listened to music with about 10 of us who didn't want to get wet.

The rain subsided and I was able to get into Red Rocks about 7pm. As we were walking up the stairs we saw a beautiful sight: a rainbow behind the stage. Everyone loves rainbows, especially neo-hippies and we all felt it was a good omen. 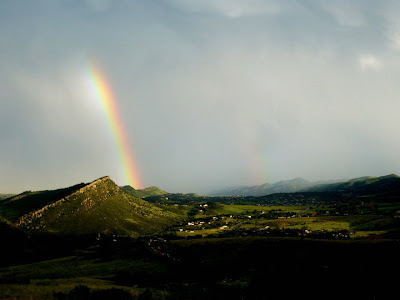 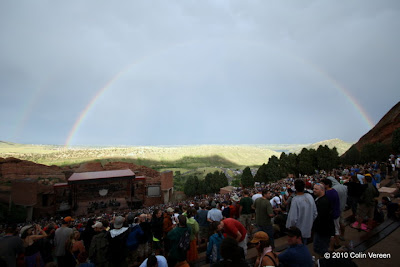 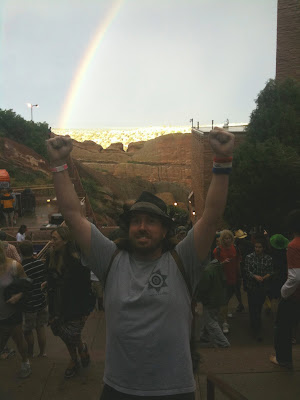 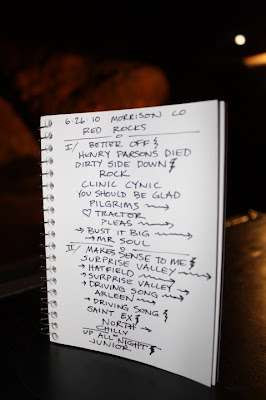 For whatever reason, Panic fans generally are not costume people. As you know I love to dress up and love a gimmick. Saturday night I wore my Wook Patrol t-shirt and it was the concert debut of my Chewbacca backpack. "Hey dude, is that a Wookie on your back?" Yup. The fight against the wooks will never be won, but we must keep fighting. Lots of smiles, laughs and high fives for Chewie and the Wook Patrol.

I enjoyed the Saturday show but in retrospect it was the weakest of the 3. Panic played strong but parts seemed a little sloppy. Still, I had a great time. The sunset was breath taking during Love Tractor and I was surrounded by many great friends. My favorite part was the Surprise Valley > Jam > Drum Solo > Hatfield > Surprise Valley segment. Surprise Valley is a song born in Colorado and Red Rocks and JB's singing during Hatfield connected with my soul. The lights were beautiful on the rocks and I caught glimpses of lightning over Denver as I gazed into the full moon peeking through the clouds. The scene was absolutely beautiful and classic Red Rocks. 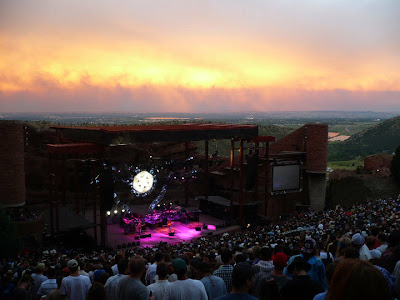 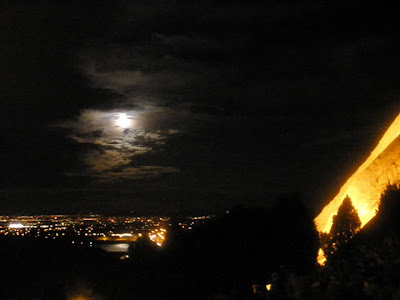 After the show the dance party continued back on the party bus and we arrived at Cervantes without incident. I was unsure what I was going to do next, as it was only midnight and there was not a big after show like there was Friday night. It seemed like most of the party bus was also unsure of where to go as we mingled around Welton for half an hour weighing our options.

I befriended a cute couple in their 20's from Chicago living in Durango for the summer on the party bus. Jori and Scott are fellow Phish fans and and they picked up on my vibe. They decided they wanted to go where ever I was going. Kind of cool to connect with new friends who trusted me to show them around Denver. We headed over to Quixotes to check out Fareed Haque's band and the hardest working rock band in Denver, The Dyrty Byrds.

After 2am we moved to an after party at a friend's house. The party had about 15 awesome people who just wanted to party, tell jokes, dance and laugh. We danced to Tipper and Emancipator till dawn, and I'm fairly certain there were several good-natured supernatural creatures in attendance.

I made my way back to my own bed safely and passed out sometime around 8am. I woke at 1pm once again to my phone ringing. Even I need a little motivation sometimes. I was a little worn out from the past 2 nights and did not have a ticket to the Sunday show, which had an early start time of 4pm. I felt like I wanted to remain horizontal for a few more hours and my bed was warm, soft, and loves me. Still, I can't say no to a party. Gavin found me an extra ticket, and there was nothing else to do but get up, take a shower and put on my WAKE UP AND RAGE t-shirt. I scooped up my new friends Scott and Jori and we made a dash out to Red Rocks once again. 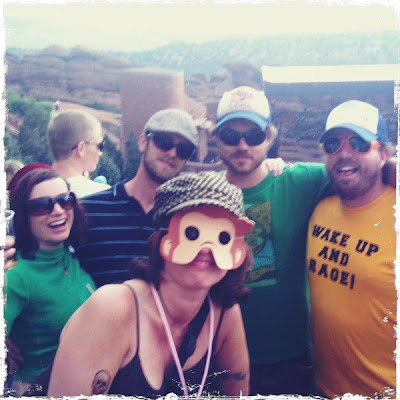 Days like Sunday June 27 are why there is the saying in the Panic community:

How true, how true. 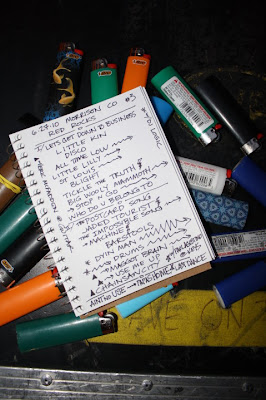 I have been seeing Widespread Panic since 1997 and Sunday's show is the best show I have seen from Panic in over 10 years. I don't even know which shows were better, I'm just saying that the Sunday show was of the highest quality, start to finish. The Maggot Brain > Use Me with Eric Mcfadden guesting on guitar was straight disgusting. My jaw is still somewhere at Red Rocks. And what other band plays a 30 minute encore for their 3rd show? Great stuff. 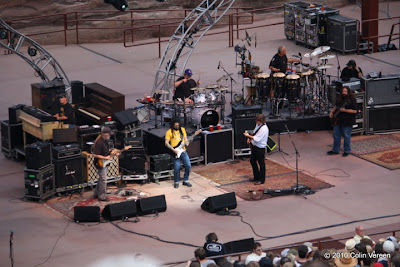 I hope you can catch Panic this summer - you will not be disappointed.
Posted by the joker at 2:22 AM

you should listen to this:
http://www.megaupload.com/?d=LP8S8LCZ

Jason and I were at Quixotes for Fareed. We left after his first set and went back to your place. We watched Where The Wild Things Are, crashed, woke up at 7am and you were still not home.

Great review, I agree that show with McFadden was amazing! Glad I finally ran into even if it was in the bathroom after the last show, lol.