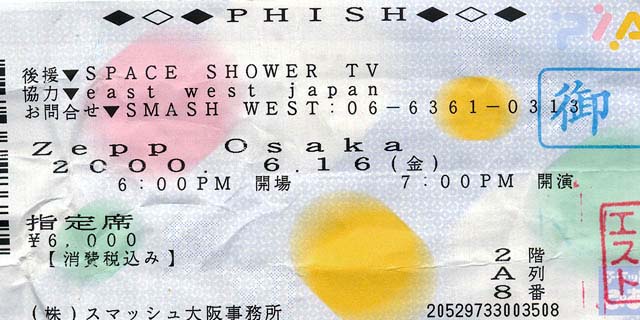 All good things must come to an end. Phish completed their epic seven show tour of Japan with an amazing show in Osaka. 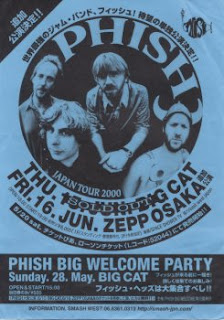 This was one of my favorite shows from Japan. I usually burned copies of this show for Phish newbies because they played a nice mixture of old school and newer songs, not to mention my favorite Phish song... Slave to the Traffic Light.

You ever get that feeling that Phish played a song specifically for you?

Well I got that feeling in Osaka. I had been eagerly awaiting to hear a Japanese version of Slave since my arrival in Tokyo. And it was well worth the wait.

We spent the day wandering around Osaka. It's the city of water, with plenty of rivers and canals connecting the city. The shopping area was dense, but not as hectic as Tokyo. Beano found glow sticks. We saw Page crossing the street and I took a quick photo. Senor and I went bowling and you buy your rental shoes at vending machines. Went over to Cosmo Square, where the venue was located. Zepp had a theatre in Tokyo (I think it's a chain?) as well. I saw a couple of Phish posters and flyers around town.

The Zepp Osaka was spacious and there was a carpet on the floor! If you spilled a drink, guys in white shirts and towels sprinted into action and cleaned up the mess within seconds. They reminded me of ball boys in tennis at the US Open. They both hunched down, in the middle of the action, ready to pounce when duty called. You'd never get that sort of service in America.

The last Phish show was nearly perfect and borderline flawless. It was a clean crisp show and one of my favorites to listen to one rainy days when I need a morale boost. I had several hilarious moments at the show. I got separated from Senor and Beano and hung out with Zobo in an area about fifth or sixth row in front of Trey for most of the first set. We had so much fun and enjoying life in the moment. During the lyrics in Golgi Apapratus when the band sung, "I saw you with a ticket stub in your hand!" Zobo dug into his wallet, whipped out his ticket, and held it up over his head. With a belly full of mushrooms, and a head cloudy from hashish and Kirin, I busted out laughing, nearly falling to my knees in a hysterical seizure.

During First Tube I turned around and saw Senor jumping up as high as he could throughout the entire song. He had a wide smile and everyone around him knew he was having a balls out time. I've known the guy since 1990 and that was one of the happiest that I had ever seen him. With each note he tried to jump higher and higher... one of those rare moments when the music and Phish took over your entire body and controlled all of your physical movements.

At some point during the end of a smoking first set, I was very inebriated and closed my eyes during Reba. I floated or wandered into the middle of a group of locals, about eight or so Japhans, who left me alone. They kept dancing and encircled me. When I came to, I was completely lost. I had that feeling like I woke up from a dream, but couldn't tell if I was still in a dream. It seemed like a Japan was one long dream. Did all of that happen?

I came very close to freaking out. It is a natural occurrence on psychedelics when you forget where you are. I turned to my left and saw a smiling Japanese girl wearing a tie-dyed shirt. That's when remembered that I was in Japan. There was music playing and I looked up at the stage. I was forty feet in front of Trey. I whirled around and saw Beano and Senor jamming out to the music. I was among friends! Then I forgot what song they were playing. Was it still Reba? Or did they segue into another song during the short period of time I was trying to get my space together? That's why I write down the setlists. After a week of very little sleep, too many party favors, and very little food... I found myself very loopy.

I hit a personal high in Japan. I can count on my right hand how many times I've been that far gone since then. I'm a head taller than everyone in Japan. I turned back around and saw the floor of the venue flooded with the dancing and grooving crowd. I felt like I was a giant among Hobbits. It was one of those memory burns.

The second set was just as intense as the first set. I had not yet heard my favorite song, Slave to the Traffic Light, and knew the second set was my last chance. An hour into the set, I was blessed with an Osaka Slave... shit, a Japan Slave! I stood in awe, on the verge of tears, and goosebumps three inches thick bubbled up on my entire body. I was so close to the band I could almost touch them. When I saw Beano soon after, he was pumping his fist. He knew I was waiting all week to hear my favorite song. Nothing is more satisfying than flying half way around the world, and hearing one of your favorite bands play your favorite song.

Here comes the cliche... it was as though they performed Slave to the Traffic Light just for me.

I would also feel the same way at that trainwreck of a final show in Coventry, Vermont.

I can never write enough about Japan. Some day, I hope to go back and live for a short period of time, where I'll pen my novel about my Phishy travels in 2000.

A decade later, there's not a day that goes by where I don't think about Japan. I made some amazing friends. We taught each other an unquantified amount of small things that blended culture, music, and life. I was moved by the Japanese's spiritual approach to music. Despite the communication problems we all bonded. Music, and more specifically Phish, was the middle ground where Americans and Japanese Phisheads found a place where we could share the finer moments in life. The friendships and bonds that were created in June of 2000 are among some the the strongest and most meaningful on my journey through life.

I always wanted to tell Page and Mike and Trey and Fish about how the significance of those shows affected my life in a positive way. Those experiences in Japan shaped me as a person and as a writer, which would have never been possible if Phish never made the decision to tour Japan.

So here's a personal message to the boys..

Thanks for going to Japan ten years ago. It's been an integral source of friendship, inspiration, and sincerity in my often stormy life. Thanks for sharing those intimate moments with me and my friends both old and new. A decade later, I can still recall those delicious memories like it was yesterday.