We'd been eagerly awaiting the Phish Great Woods (Comcast Center) show ever since my brother in law snagged 4th row center seats in the Phish pre-sale lottery. He finished work for the summer yesterday, and we were well prepared to party at Phish. Picking up burgers, dogs, booze, and Mark, we headed down to Great Woods early, arriving at 4pm. I'd read horror stories about the parking situation there: they offer free parking, but then you get stuck in the lot for hours after the show. We ponied up $30 to park across the street in a private lot, which was a slam dunk decision: we had a spot down a tiny hill, near some woods, with water behind it, ample room to lay out our camping chairs and hibachi, and there was even a band playing in the parking lot.
Prepartying hard for 3 1/2 hours, we eventually journeyed across the street to meet up with some of Dan's friends before the show. We each poured a beer into a plastic red Solo cup, and walked up to the main street. I already knew the State Troopers were in aggro mode, because upon arrival I'd decided to walk across the street to the multi-mart to grab another bag of ice for our cooler. They had an entire lane coned off, but I stood patiently on the curb waiting for the officer to stop traffic. When I stepped down, putting one foot in the street, he turned on me like a gunslinger, snapping "GET BACK ON THE SIDEWALK!" Whoa tiger. Don't tase me bro. I stepped back up onto the curb. Now, heading into the main lots with our red cups, a different Trooper shouted to us as soon as we appeared out of the parking lots: "You can't bring that with you." (We'll ignore the fact that he had no idea what was in the cup) Obviously, the instant reaction is to stop, turn around, and drink it, which we tried. "Do NOT drink it - pour it out. If you drink that we'll lock you up!" Whoa cowboy - no problem - don't tase me bro, and don't lock me up! I'll dump it out... Like a criminal in a movie slowly and deliberately sliding his gun to a cop, I slowly bent down with one hand above my head and one hand on the cup, and poured out the beer.
We found Dan's friends in the main lot, and were still psyched with our decision to pay for parking. I laughed at the sign for the venue's "Premium Lot." Hey - putting a sign that says premium doesn't make it premium! I'd read lots of mixed reviews about the level of service demonstrated by Comcast Center staff in getting people out of the VIP lots quicker... I took all of the pictures in this post on my Casio Exilim. It was really hard to get in-focus picture, even up close, in the low light situation, but I think some of these came out pretty good... 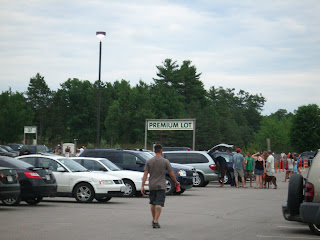 Heading inside, we grabbed NINE DOLLAR beers and found our seats in short order. Sick - 4th row center. The show started about 20 minutes later, and we were pumped up. One thing I always like to do at concerts is to look at the crowd, which in this case required me to simply turn around 180 degrees. I constantly checked the scene behind me, but didn't really feel like the crowd was rocking until Divided Sky, which quickly lost momentum in a slow song I love: Dirt. Kill Devil Falls rocked hard, but the new song Doctor Gabel, which I also liked, killed the crowd energy again. Trey didn't seem to notice, I guess, as he thanked the crowd for being receptive to the new song, and rewarded us with Antelope. Set the gearshift for the high gear of your soul - you've got to run like an antelope, out of control. That anthem never gets old, and I went typical Kid Dynamite Bonkers, bouncing up and down triumphantly, and collapsing back in my chair in an exhausted huff at the set break. 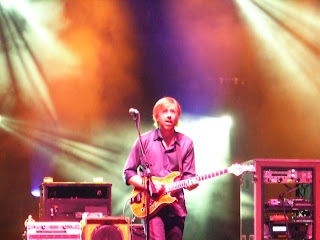 I ventured to the bathroom, which was like a sauna in a Turkish prison (at least what I'd imagine that's like) before grabbing more $9 beers and heading back to my seat. The good thing about the extreme beer prices is that it drove the customers away and there were no beer lines.
The second set got grooving right away with Mike's Song and Weekapaug Groove. I always said that if I were to make a movie, I'd use Weekapaug as the music in my chase scene. Two separate people behind me had "Sneakin' Sally" signs, and Trey obliged, and later played 46 Days, which I've always thought was very similar to Sally in terms of musical structure - especially the beginning. 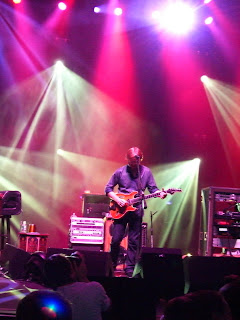 Limb by Limb was hot, and Golgi Apparatus got the crowd really frenzied, finally, which I noticed as I jumped up on my chair with my back to the stage, arms raised in a giant V, ticket stub in my hand, as I screamed along, "I SAWWWWWWWWW YOU - with a ticket stub in your hand!" 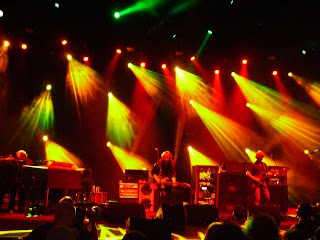 Slave was hot, as usual, but I went ballistic when I saw/heard Trey turn to the band after the song and say "Loving Cup." That's how close we were - I could see him tell the band what song to play. Of course, Loving Cup was absolutely sick, with the refrain, "Oh, what a beautiful buzz," echoing through the Comcast Center. 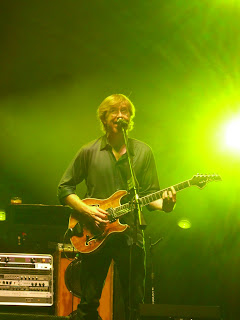 I like this pic of Page with the spotlight behind him: 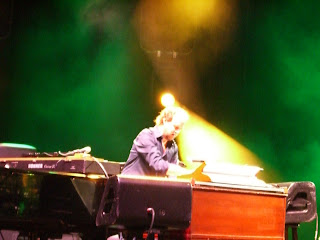 And I think this washed out red picture is cool: 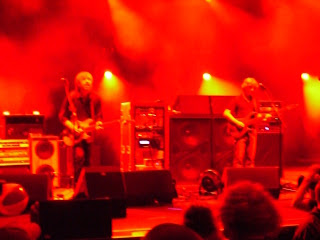 Now, I promised/threatened that I would take my shirt off if Trey played First Tube, which is how I came to be jumping around waving my shirt over my head going absolutely apeshit as they ripped through First Tube as an encore. I was also committed to take my pants off and run onstage if they continued the terrific Tweezer Reprise theme, but fortunately for me, I was let off the hook on that front. Here's a few videos I shot - the first is of Trey's "O" face during Antelope (easier to upload one video of the O face than a bunch of pics):
And then this one of Loving Cup, which gives a sense of the crowd energy during the song:
All in all, we had a sick time from insane seats at a great show.
-KD
Labels: Phish