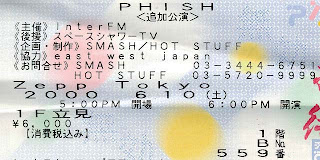 Ten years ago today, I saw my first ever Phish show in Japan after I got shut out the first night. The pic from above was my actual ticket stub.

Set I: Down With Disease, Sample in a Jar, Piper, Lawn Boy, Guyute 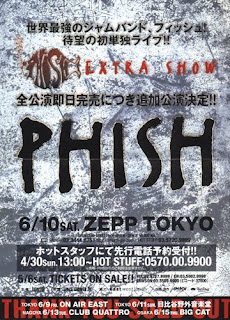 I was pretty excited about my first Japan Phish show after getting shut out the night before. Senor, Beano, and myself took the subway and arrived at the venue early. The Zepp Theatre was part of a huge entertainment complex near the water which included the largest ferris wheel in Japan.

I ate Pizza Hut which included an interesting combination of corn and potato wedges on my slice. There was a meat topping, which I would classify as some sort of Spam-like substance. I met a couple of Canadians who were living in different parts of Asia and teaching English. They met all up in Tokyo to see the shows and were excited to see a band like Phish make the journey to Japan. Not too many bands visit Asia so they jumped at the chance to see Phish.

In Japan they have an extremely orderly society which trickled down to general admission concerts. At that particular show, you were admitted entrance by the number on your ticket. Some guy was shouting out numbers in Japanese and luckily the Japanese hippies I befriended the night before aided with the translation.

I had a low number, one of the first 30, so I wandered inside as soon as the doors opened. Senor and Beano had higher number on their tickets and had to wait in line. I rushed up front and saved space for them. We were very close, practically in the front row.

The theatre was very small, maybe 3,000 max capacity and we hung out with the guys from Horse. I had popped shrooms before I walked inside and smoked enough hash during the first set to kill a litter of kittens.

According to my notes, the "first set was dark and trippy." The boys opened up with a devious 20+ minute version of Down with Disease before they came up for air with Sample in a Jar and then went back off the deep end with a sensational Piper that also clocked in at 20+ minutes. They mellowed things out with Page crooning the crowd with Lawn Boy. They crowd went ape shit. Japhans love Page.


By the time Phish started their fifth song of the set, they had been playing for almost an hour. They closed the set with a "creepy" Guyute. (Editor's Note: I listened to Guyute as I wrote this and it was not as evil or maniacal as I recall. I blame the psychedelics on my original assessment!)

Here's a video of Guyute..


At set break, I said something to Senor that the first set felt more like a second set. Since it was too crowded up front, we wandered to the back of the floor for the second set. There was a lot more room to dance and breathe. The shrooms hit me hard. I kept my eyes shut and danced my ass off through the intense trip.

Fishman was the MVP that night. Sand was the highlight of the second set with the one-two punch of Gin and Twist also knocking me on my ass. I was pumped for a Tokyo Loving Cup! And Page did not disappoint.

During Limb by Limb, a big disco ball was lowered from the ceiling. Doesn't matter if you are American or Japanese... all hippies like flashing lights.

Overall, it was a weird show and felt as though the first set played like a second set and vice versa.

Since I was the native New Yorker with an extensive background in riding subways, I had the daunting task of leading us back to our hostel, which was not easy since we were all shroomin' our balls off. We had to take two or three different subways and luckily the subway lines are color coated. I have no idea how I managed to get us all back in one piece... but when we got back we went to the roof of our hostel and drank beers and smoked hash and glimpsed at all of the glimmer lights that illuminated the Tokyo night sky.
Labels: Japan Tour 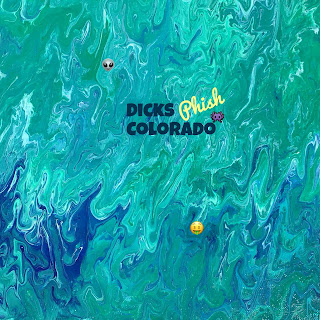 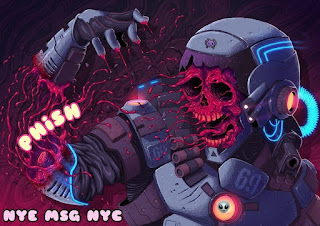