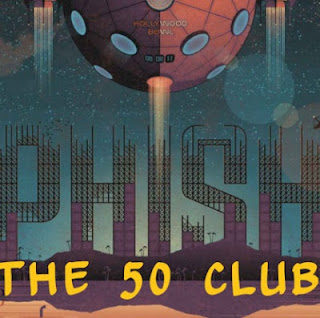 At the Cincy show last weekend, I surpassed the 250-show mark. I never thought I'd see another show after Coventry, so I 'm extremely blessed that Phish decided to come back for the 3.0 incarnation of the band.

I've had the good fortune to see Phish perform 24 different songs at least 50 times. Those songs are among the most popular in Phish's repertoire including Chalk Dust Torture, DWD, Bowie, YEM, Antelope and Hood.

And on the cusp and almost there...

Here's the most weird and haunting stat... I've seen TTE at least 10 times.

Thanks to the original stats guru ZZYZX for helping me compile these stats. Please note that these stats are an approximate estimate because stats from a couple of shows (Japan tour 2000) were not included in this mix.

I'm curious... what songs have you seen the most? Are heavy hitters like YEM, Chalkdust, and DWD at the top of your list?
Posted by Pauly at 4:20 PM

My top five from 53 shows seen:

3.0'er here this doesnt include the coventry simulcast I attended. Live shows only:

I forgot to mention my Total show count= 20. So almost every third show Ive had a Suzy, Antelope, Bowie etc.

Out of my meager 23 shows, I've seen 8 Guyutes? This tune is only topped by 9 YEMs and Bowies.