We woke up at a tweaker motor lodge in bumblefuck Appalachia, the only accommodation we could find on short notice in the middle of nowhere after we got lost leaving the Burgettstown show.

Pro tip: never let the guy on two hits of acid act as the navigator.

I'm spoiled. Because of my job as a poker reporter, I've stayed at some of the swankiest hotels in Las Vegas, Monte Carlo, Spain, Sweden, London, and Australia. While wandering around on Phish tour, you never know where you'll end up... like a tweaker motor lodge in the middle of nowhere. After the Burgettstown show we ended up at one of the most horrendous places I've ever stayed. It was even worse than the crackhead motel in Cleveland last summer. The ceiling leaked right over my bed. One pillow was soaked through. Iggy's pillow had a yellow-brown stain. He was convinced that someone was murdered in his bed. We slept with the lights and TV on. I slept in my clothes without the covers. I was afraid I'd contract bed bugs or some sort of flesh-eating bacteria. The room's AC was at least fifty years old and I don't think the filter was changed since the Carter administration. We're lucky weren't hospitalized with Legionnaire's Disease.

We fled Appalachia as soon as we woke up to avoid becoming enslaved as a redneck-version of the Gimp. We made another stop at Cracker Barrel along the way. I'm on the tour diet -- one major meal (usually at Waffle House or Chaka Barrel) when I wake up and then noshing on grilled cheese in the lot before/after the show.

We arrived in the lots at Blossom around 4ish. The lot scene at Blossom is always tons of fun with an "anything goes" philosophy. The Shakedown is massive and winds through the lot with vendors lined up on both sides of a walkway. The po-po left everyone alone... as it should be. It's a festive vibe and everyone is in a great mood. That's why Blossom is one of my favorite places to see the Phish.

Iggy, G-Money and I scored pavilion seats right in front of the soundboard and CK5. Watching CK5 work the lighting board is like getting a chance to watch Picasso paint. He's a true artist.

I forgot about the wood paneling inside Blossom. The venue is an architectural gem and almost looks like a pyramid depending on your perspective. 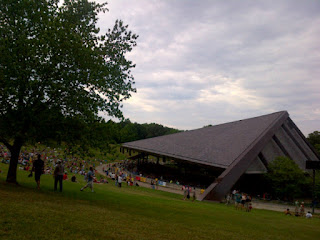 The crowd-pleasing Sample in Jar kicked off the festivities with a sing-along. The shortest Tube popped up second. It clocked in under 4 minutes. Sheesh, why even bother?

Iggy was hoping to hear a few songs this show (Axilla, Roses Are Free, and Golden Age) and the lucky focker got all three he was chasing. A hard-rocking Axilla was in the three hole with Bathtub Gin batting cleanup. Gin was the longest song of the first set, but the jam lasted under eight minutes -- I know because Iggy and I had put a small wager on the timing of the jam. It was one of a few bets I won at Blossom. It's about time I got paid to see Phish!

Iggy was chasing Ween's Roses Are Free and he got it early in the first set. Some day they are gonna unleash a monster 15-minute Roses jam. Okay, that might never happen, but I can dream right?

Limb By Limb is a song where Fishman resembles an octopus because it almost sounds like he's got eight arms laying down the beats. I swear I heard a Dave's Energy Guide tease.

The set continued with another rocking tune... Free. At this point it was pretty evident that this was going to be a "rock and roll" show, which is always fine with me.

The boys squeezed NICU in the set and "Leo" got to show off his chops in a savory solo. Possum is so overplayed that you just have to sit back and chuckle whenever you hear the intro. But like Scotty B said in the last episode of type II cast, Phish always nails Possum... which they did once again at Blossom. The pav was ready to explode as soon as Fish belted out the intro to Possum.

The Wedge and Corinna (yes, another cover) were a nice one-two punch toward the end of the set, but it was the Meatstick that got the crowd riled up, especially the kid who wore the hotdog costume. He climbed up on his seat and jumped up and down. He was the happiest guy at the show. 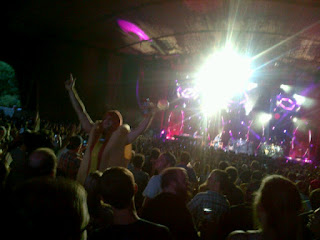 Meatstick included Japanese lyrics and audience participation. Trey thought he and Gordo were doing a bad job with the Meatstick dance so he invited a couple of cute Phishy chicks from the front row to show them how to dance. Then he picked out two more. Then all of a sudden almost ten or so phans were onstage dancing around. Hotties onstage? I thought I went to see Phish, not Girltalk.

The second set kicked off with a TV on the Radio cover of Golden Age. Iggy was ecstatic. I was thrilled because Golden Age has become a nifty jam vehicle over the last couple of tours. The silky smooth jam took a turn into deep waters. Trey sat back and let Page and Gordo lead the way during the second half of the song. I caught a few 2001 and humping whales teases and CK5 was not shy about tossing a few UFO-lights into the mix.

The spacey and pulsating jam eventually morphed into Ghost. The Blossom Ghost scared the heck out of some people around me, especially Iggy, who was completely sober for the show.

"This is craaaaaaaaaaaazy shit," said Iggy a few times during the menacing and sinister Ghost jam.

The Ghost jam reminded me of a bloody battle in the middle of the woods. It was as though the boys were wandering around the thickest fringes of a forest and stumbled upon a fierce demon-like creature that bolted into the darkness, yet Phish were relentless and chased after it until they destroyed the rambunctious beast.

My favorite moments from this summer's tour are the stripped down jams when Trey sits back and dishes to Gordo and Page. In his case, "less is more" is an understatement. Trey's biggest problem is that he gets too carried away and plays "too many notes" and as a result we get ripchord jams and self-indulgent wanking. Whenever Trey listens and acts selfless and allows his bandmates to contribute and take the lead during jams, the results have been stupendous -- especially in the second half of the shows.

In the six shows I've seen (out of 11 thus far), every second set included at least one 15- to 20-minute section when the band was en fuego. Phish is kicking out the jams and pushing the limits on their improvisational abilities.

Yes, as you can see the latest addition to the Set 2 behemoths included Golden Age > Ghost to start the set, and the Tweezer > Walk Away was pure smoke.

Tweezer was a perfect storm of events and popped up in the middle of the set when the band was in peak form. They tossed in a few Meatstick teases and licks, not to mention a few Trey hijinks with muttering lyrics to Another Brick in the Wall, Under Pressure, and Ice Ice Baby. Yes, Vanilla Ice got a shout out. I wonder if that washed-up fuckstick is gonna try to sue Phish Inc. for copyright infringement?

Phish nailed Walk Away. They smoked the shit out of it. I've seen my fair share of out-of-sync and phoned-in Walk Aways so this one totally floored me. Tight. Tight. Tight. Page slayed it. The jam out was insanely packed with oodles of spastic energy.

Oh, I almost forgot about the awesome surprise -- Sweet Virginia -- as sung by Fish. I love anything off of Exile on Main Street so I'm easy to please in that regard. Sweet Virginia was one of six covers played on Sunday ay Blossom. Phish covers are a freakish anomaly. They absolutely kick ass on every cover song they learned and eventually keep in the rotation.

After a smoking Tweezer-Walk Away, Fish needed a break. After a mellow Horse > Silent, the band went right back to jamming with Piper. This version was strong and magnetic, but it's going to be overlooked because of the other monster jams (Golden Age-Ghost and Tweezer-Walk Away).

Oh, and Antelope was all heat. Trey wankage was at the highest levels all night during the Antelope jam. That's how you end a set.... with a fucking exclamation point.

"I never saw so many people dance that hard," explained G-Money.

Trey was jumping up and down during Tweeprise like he had fire ants in his jockstrap. It was fun watching Trey have fun. When Trey has fun, it rubs off on everyone else. Fun is infectious.

Nothing is better than walking out of a sizzling show because everyone is in a good mood. That's what happened at Blossom. Almost 20,000 phans spilled into the lots and Shakedown with a spiritual revitalization. I was one of them. Halle-fucking-lujah.

Phish has been on fire the last few nights and steadily improved each show since Friday's performance in Cincy, topping that with a smoking show in Burgettstown, and then topping both with a rager in Blossom.

Phish is taking a few days off... which sucks. The way they are playing, too bad Phish doesn't have another show scheduled until Thursday -- when they kick off four consecutive nights with an old school Deer Creek-Alpine Valley run. I'll be at all four shows. Hope to see you there.

Here's my other recaps from this tour: