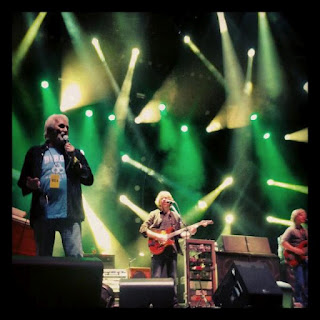 Bonnaroo 2012. Welcome to the future.

Sunday night was my first incident rocking an official webcast for Couch Tour. It would also be the last night I'd sweat the show from my apartment in California and before I flew out to NYC for the remainder of Leg I.

Out of all the shows listed on summer tour, the Bonnaroo gig was the one I wanted to attend the least. Thank goodness for the live feed! Bonnaroo is sort of like Mecca for jambands... you have to make the pilgrimage at least once in your lifetime. I attended Bonnaroo three times including the first one and in 2009 for Phish's first appearance at the festival.

Bonnaroo is a beast. Bonnaroo is a commitment, like climbing a mountain. It's really set up for true music enthusiasts and phans with tons of stamina (heat exhaustion, dust, schwilly kids, and more wooks you can shake a stick at). The phrase, "I'm too old for this shit" applies.

Thanks to technology and the gang at YouTube, I was able to watch the show with my girlfriend -- literally on our couch -- without having to actually travel to the armpit of Tennessee and fight the claustrophobic crowds to see different bands. Over the previous three days, I monitored the live stream and watched some of my favorite artists along with a couple of new acts.

But let's be honest here... I was mostly interested in one thing.... the Shins. The band will change your life, I swear by it.

Just kidding. I almost slit my wrists listening to ninety seconds of the Shins' hipster melancholia.

The Phish never blow the fucking hinges off the door for festivals. It's usually a greatest hits buffet with minimal jamming as to not freak out any new phans, or drive away any curious interlopers. I also get the impression that Phish wants to impress their peers -- fellow musicians -- who might check out the Phish for the first time.

As expected, Phish played a set of classic Phish songs, but to a lot of people's surprise, Phish repeated a slew of songs from the Worcester run. Sure, one or two songs would have been expected... but I don't think the masses were prepared for a dozen repeats in such a short time... especially since Phish was bragging to the press that they intended on playing 200 songs this summer.

Down With Disease opened up two consecutive sets in a row -- a first time for everything. That would set a tone for the evening. First set DWDs are different beasts than second set DWDs. For one, they are much shorter and not much of a jam vehicle.

The "holy shitballs" moment of the show occurred the moment Trey invited Kenny Rogers to join them. At their last ROO performance, the Boss sat in with the band and forgot Page's name (Mr. Piano Player). This time, a smoothly Botox'd version of Kenny Rogers stepped on stage. He was rocking a cordless mic and was still wearing his credentials, so beefy security thugs didn't think he wasn't some crazy cracker crashing the party.

Kenny sat in for The Gambler. Both of my world's collided. Benjo sent me a text. He was rocking Couch Tour from his apartment in Paris. It was 3am and he wondered, "Who is Kenny Rogers?"

The tune was uneventful. It was more schtick than anything else. The best moment happened well after Kenny exited the stage and Trey teased the shit out of The Gambler at the start of Possum.

My favorite part of the first set was a dark, yet stripped down version of Tweezer. The bare-bones elements delved into Plinko territory. Tweezer was the only song in the first set to pass the ten minute mark (clock in at 12+ minutes). I was thrilled to see the boys deconstruct Tweezer.

Repeats? Doesn't bother me. Every version is different. Some songs I can hear every night, like 2001 or DWD. Others I wish they'd shake from heavy rotation (e.g. Possum or Zero). Twitter exploded with perplexed comments along with a significant amount of hater spewage -- both in jest and full-blown snark. The running joke on Twitter was that Phish was playing "Woostah Reprise."

We get so used to Phish changing up sets, that many of us did not expect all of the repeats. At the same time, I know I was anticipating a few heavy hitters that were not yet played.... YEM, Stash, Wolfman's, Bowie, Fluffhead, Piper, and Divided Sky... just to name a few.

I embraced Couch Tour at moments when I wasn't into the music. For example, we watched the first half of the last episode of Mad Men during setbreak (did Roger Sterling take LSD again??) instead of fighting the bathroom lines or trying to find spun-out friends. Being at home allowed me to finish packing for tour during mediocre songs like Alaska or if I got bored with a jam like with Light.

I was feeling a cover to launch the second set, but was thinking more along the lines of Rock and Roll or Crosseyed and Painless. Trey gave a nod to all the cosmic-hipsters with Golden Age, but he rip-chord'd the jam in favor of a 2001 dance party.

One of the more notable highlights from the second set was the sinister jam out of Carini into a faded-funk version of Shafty. They soundchecked Shafty in Worcester, so you knew it was coming... eventually.

I'm not all that bummed out I missed Bonnaroo because I got to watch everything via the live stream. Sure, you can't top a live Phish experience... which is part of the reason I do whatever I can to see as many live shows as possible. But, it was pretty cool that Phish, Bonnaroo, and YouTube all joined forces to provide a free and pleasurable Phish-like experience in the comforts of our own homes.

I sincerely hope that Phish will offer up live webcasts of every show. The technology is there... so what's stopping them?

Three shows on Couch Tour dunzo. See ya next weekened in Atlantic City. I'm hopping on tour for the rest of the summer (skipping a show here or there, but pretty much seeing the rest of Leg I).

Don't forget to follow @CoventyMusic for tweets live from AC. If you see us raging hard in the lot or on the Boardwalk, then definitely stop by to say hello!

Where the fuck is my link you fucking whores? Come on.

Funny, I happened to watch the Shins play (the only only 'roo band I watched but Phish) and I thought they were awesome, so I thought you comment was a true one...i do love your "hipster melancholy" comment though! ;)