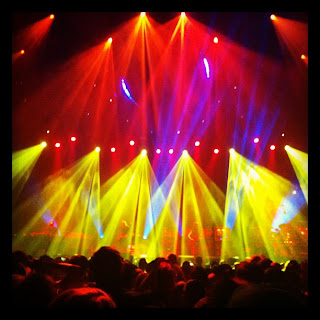 I was confined to Couch Tour for a second night in a row, but two of our crew made it to Worcester -- Kid Dynamite and Irongirl. Both reported that the lot scene was overrun by tanks. The local federales had a tough time keeping up with the nitrous entrepreneurs so the fuzz essentially gave up. The balloon mongers won. Balloons and goombas. Balloons and wooks. Balloons and Phishkids. Hundreds of dudes in Boston Redsox hats sucking down on balloons. Balloons littered Shakedown.

"It looked like a balloon carpet on the ground," remarked Kid Dynamite.

Balloons were omnipresent but extra tickets were scarce. It was the first Friday night Phish show of the year and every freak within a 90 mile radius descended upon Worcester.

The second night of a multi-show run at the same venue always sounds better because by the time the second gig begins, the band is familiar with how the room sounds. After a tentative tour opener, Phish was ready to throw down in a sweatbox they've smoked the shit out many times over.

What a different a night makes, eh? On Friday's show, Phish sounded tighter, pushed the envelope on a few jams, and kept the buzz-kill moments to a minimum.

The show really got cooking during Ween's Roses Are Free. The version was barely ten minutes in length but the second half spawned a delicious jam that delved into Type II territory. The energy in Julius showed some shades of yesteryear. The first set ended on a reeling combination of a speed-frenzied Maze and infectious Bathtub Gin.

The bathroom situation at DCU is so horrendous that Mr. GG, an old friend from college, never bothered to fight the schwilly hordes in the claustrophobic hallways. He pissed in an empty cup. Twice. I gave him guff.

"This isn't Panic tour, brah!" I chastised him. "Stop being a redneck. You have a master's degree for fuck's sake."

Thursday night's show was anchored by a solid second set, and Phish stepped it up a notch on Friday night in the second and final set of the night. Although, the song selection seemed somewhat formulaic. Seriously, do any of you Phishnerds know how many times Phish played this second set combo: DWD opener; Zero closer; but with both 2001 and a Mike's Groove? It happens once in a blue moon and if you happen to see Phish on one of those nights then you're a lucky mofo.

Yeah, I counted it up and exactly fourteen thousand heads on Twitter and Facebook called Down with Disease second set opener. It had its moments. Charlie Dirksen (@cdirksen) summed it up best in a tweet: "So much for the rumor that one of @treyanastasio's New Year's resolutions was no more DWD second set openers."

Also thrown into the mix was a Sand and a wild rumpus ensued. Makisupa (with key words "measles" and "Sour Diesel") filled in the middle of the Mike's Song and Weekapaug Groove sandwich.

After ruining the mood with Velvet Cheese, the boys resumed the dry-hump dance party with 2001, followed up by a loud Zero with lots of Trey wanking.

I have mixed feelings about encores. Some bands nail encores because they know how to end a show, like Radiohead for instance. Sure, Radiohead played a lengthy single set at Bonnaroo, yet they ended their performance with two different encores, which were jammed with nine songs.

Phish on the other hand has been known to cop out with a groan-inducing Show of Life or Velvet Cheese (which they thankfully played in the second set to give a bloated Fishman a break after a thunderous Mike's Groove). But on Friday night, Phish pandered to the crowd with a safe, yet funkified version Oh Kee Pah > Suzy Greenberg. They could have used the moment to pay tribute to MCA with Sabotage, or really made a statement with a sizzling rendition of The Shape I'm In in honor of Levon Helm. Alas, they stuck with the most popular chica in the lot... Suzy Greenberg. Hey, at least Phish ended the two-show run with an exclamation point.

You always want to see Phish on a path when they are playing better than the night before. That's the good news as the circus migrates to Tennessee for a Sunday night slot at Bonnaroo.

If you didn't make it to Bonnaroo, you can still stream several acts on two different channels at Youtube.com/bonnaroo. It's free! BTW, YouTube will be streaming two sets of Phish on Sunday night starting at 8pm local time (9pm for east coasters or 6pm PT).