Cincy Recap: Can You Still Have Fun? 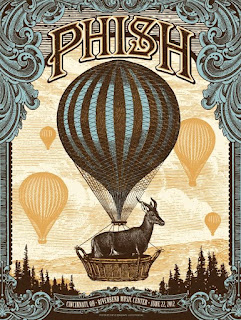 That's wisdom of the lot. Historically speaking, Phish always throws down hard in Cincy. That's why it was sort of shocking when the show went off the rails late in the first set after a pair of back-to-back flubbs by Fishman. Alas, the boys regrouped after a brief setbreak (shortest this tour thus far) and then brought the heat in the second set to salvage what could have been a shit show.

Since 3.0 began, I catch the Midwest shows with the Cincy crew: Iggy, GMoney and Mr. Fabulous. I'm the baby of the group, which is rare these days on Phish tour when I'm usually the oldest (ho hum, that's how I acquired the moniker "The Brett Favre of the Lot"). The Cincy boys are old school Deadheads, led by GMoney who at one time played in the best cover band in Las Vegas back int he 1990s.

The Cincy crew picked me up at the airport on Thursday. We raged until the wee hours (that is, until Iggy passed out on the floor). Once we woke up Friday, it was balls to the wall. The pre-party included Euro 2012 soccer and Germany vs. Greece (I had bet the OVER in goals scored), while GMoney played a bunch of Zeppelin bootlegs circa mid-70s.

The Cincy crew knew a backdoor way to Riverbend. One of the fundamental rules of the road is to always trust locals' shortcuts! Thanks to Josh for driving and thanks to Megan for the shortcut. We trimmed valuable time off our commute, which meant more time raging it up in the lot.

Cincy's Shakedown is a unique little area encompassing a triangle across the street from the venue. I was slinging 2001 and other alien stickers. I had an extra ticket and decided to miracle it to DiggDugg. That's the beauty of Phish -- it's the gift that keep on giving. I'd rather see someone get the ticket who truly loves than band, than sell it to some schwasted frat boy with DMB tattoos. BTW... the Cincy show was not sold out! What has this world come to when Phish is unable to sell out a Cincy show?

Anyway, I had a pav seat courtesy of GMoney. I had a lawn and swapped with GMoney because he is the "Cookie Monster of the Lot" and he loves to ingest anything and everything he can get his hands on. He prefers to groove on up on the lawn with the rest of the schwilly kids.

I ate some shroom chocolates in the lot and I was ready for some high-altitude flying. The Cincy show kicked off with Wolfman's Brah, which included a mini-funkified jam. Batting in the number two hole was a cover of Frank Zappa's Peaches, which sounded much crispier than the previous butchered versions I caught in 3.0.

Up next was a true bustout... Shaggy Dog (last time played was down the road in Louisville, KY circa 1995). In 250 Phish shows, I had never seen a Shaggy Dog. Talk about an epic moment, even for a jaded vet like me. I wiped the salty tears from my eyes and fired up a fat one-hitter filled to the brim with Jedi Kush.

Runaway Jim was standard with the exception of a When the Saints Go Marching In tease. Thumbs up for that tease. I'm a big fan of Traffic and love it when Page sings cover songs, so I was thrilled to catch Light Up Or Leave Me Alone, which does not appear to often in the rotation.

Talk about a hot start... Wolfmans + Peaches + Shaggy Dog + LUOLMA... four out of the first five songs were gems indeed. To top it all off, the choco-shrooms had kick in and I was schwilly willy.

Trey unleashed a searing and raucous Wilson, much to the delight of Megan, who desperately wanted to hear it. After catching the first two AC shows, she left on Sunday when the boys broke out Wilson. Oh, and by the way... Megan is no longer a TTE magnet! There was a brief period when Phish played TTE whenever I saw show with Megan.

I had to police my section during Alaska because a pair of drunk fucktards wouldn't stop talking during Wilson and Alaska. Those types of rude assclowns send me on uber-tilt. Why attend a concert if you're going to talk the entire time? It's utterly selfish, especially when those fucksticks attempt to shout over the music in order to be heard. I told them to shut the hell up and take a hike up to the astroturf lawn with all of the other miscreants and rednecks.

Something odd happened after the Stash. Maybe the jam was so intense that it knocked Fishman off his rocker? Because Fish totally blew the intro to Poor Heart.

I think everyone was stunned because that rarely happens at a Phish show. I can only think of another flub like that -- Halloween 2010 -- when Fishman fucked up the DWD intro.

"That's two in a row Fish!" barked Trey. "We need to find a song that starts with the drums."

If Trey was joking around the first time, then you could see his frustration rise with the Moma fumble. That's not what professionals do. Page was aloof and Gordo looked wicked pissed. I gotta say, it's kind of funny now as I write up this recap a good 12+ hours after it happened, but at the time, it was ugly. I was witnessing the wheels come off the bus. Nothing is worse when you lose confidence in yourself and your bandmates.

"This is Fish's nightmare," explained Trey as Fishman ripped off the intro to Llama. The crowd lapped it up, even though Llama was slop city. At least we got a Buffalo Bill to make up for the faux pas.

I was jazzed about I Saw It Again because it's a song that explains Trey's encounter with an alien. Check out the lyrics when you get a chance and you'll see what I'm talking about.

The first set ended with CK5's favorite song. We got a bit of stage banter when Trey explained that they ask Chris Kuroda what song he wants to hear that night. CK5 always responds with the same thing -- Bowie.

I was surprised at the short setbreak, but then again, I'm sure Phish wanted to return to the stage ASAP in order to make up for their crummy first set... which started off with so much promise, but it quickly got away from them. I could only imagine what would have happened if Bobby Knight was the coach of Phish. He would have benched Fishman the rest of tour. 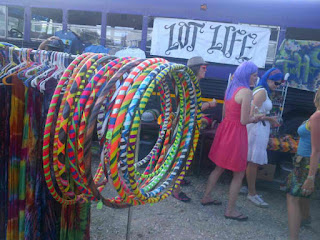 The second set kicked off with a thunderous, 12-minute Down With Disease. It was much better and longer than the Sunday's set closer in AC, although I felt the jam was way too short. We got a smooth segue into Guleah Papyrus before Kill Devil Falls. I prefer my KDF in the first set, but this rendition was tight and jammed out a bit.

Then things got ugly. I should have known something was rotten in Denmark when I caught a whiff of the horrendous aroma of a burning seed. Sheesh. Nothing says ghetto bud like seeds. Someone behind me was burning down a prison joint behind me during DWD opener. A couple of songs later, a pair of wooks passed out and one of them started puking. Cincy's pavilion is on a slight hill so all of the vomit was trickling downhill.

One of the passed out wooks woke up and scurried off. The other one was slumped over in his chair. I took a picture and posted it on Twitter with the tagline: This asshole's friend puked on me.

Seriously, what's up with amateur hour? If you can't handle your drugs, then the "JV is out back"... so stay in the lot with the other wooks.

KDF slipped into a slinky and sultry Twist, which fired me up because I moved to a new spot that did not have a stream of puke running underneath me. The crowd was excited to "woooooo" it up. The Twist jam had an evil and deviant element to it. Oh, and during the jam, I was admiring CK5's new neon vagina lights.

Halley's Comet was short as per usual when Trey ripchorded Halley's just when it got cooking. Alas, I was in favor of Trey's decision when they embarked into a plinko-enhanced Sand dance party, which eventually slipped into a soothing Roggae. I saw a few intense Roggaes last summer and wanted to hear what the boys could do with it this summer.

Iggy got his Carini, or Caprini as he called it. The short and sweet Carini was one of the louder songs of the second set, but the thrashing jam never developed and was rushed in favor of Trey's self-indulgent wank-fest with Chalkdust Torture.

A crowd-pleasing Golgi ended the set. I like to find the most schwasted guy in my section during Golgi, then I bug him out by pointing at him very angrily during the "I saw youuuuuuu with a ticket stub in your hand." They always lose their marbles. It never fails.

We were denied YEM for yet another night and will have to chase that fucker down the rest of the tour. Instead, Phish ripped up Fluffhead. High-octane, high-energy. The crowd loved every second of it, especially the guy next to me who almost poked a hole in the row of chairs in front of him when he popped a stiff woody with Fluffhead.

Never miss a Cincy show. You never know what's going to happen. And yes, this was my 250th show overall. I saw my first show in 1989 at Wetlands in NYC. Man, what a wild ride! I got a little bit of everything for #250 -- a few covers I dig Peaches and Light Up Or Leave Me Alone, a sincere Shaggy Dog bustout, and I even got puked on. Yes, despite my aging body... I can still have fun, Wilson.

congrats on #250, pauly! lesser mens minds, knees, and liver would have given out long ago! you're a superior prototype!

Congrats, Pauly! Yeah, hate to tip the hat to Trey for the uber-wanking, but he was on point last night. Although we were in the pav, I was almost insulted by the turf installation on the lawn...until I saw a little 8-year-old tour baby stand-up boarding down it on a flattened beer case. Probably the highlight of my night outside of Bowie and Fluff. Better luck to Fish tonight. See everyone in our backyard at the Creek in a few days!

Sniff... I loves me some Coventry coverage. You folks are not allowed to miss ANY stops. I will require all reports until I get to see the SPAC run.