The Return of the Deer Creek to Alpine Valley Run 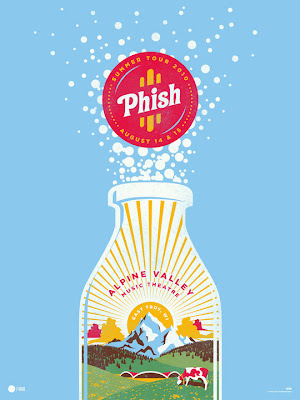 ‎
You've never really experienced a Phish summer tour until you've done the Deer Creek > Alpine Valley run. It's a Phishy journey that you have to do at least once in your life. I've done the run through the heart of the Midwest a couple times and always had a blast... even the time in 2009 when we got our entire campsite washed out by a monsoon and we had to sleep in Iggy's truck.

After a couple days off from this year's summer tour, I can't wait to get on the road in a few hours to complete this epic journey once again... especially because I didn't do it last year.

Something weird happened last summer when Phish suspiciously skipped both Deer Creek and Alpine Valley on their summer touring schedule. I heard a rumor about a rumor that something went wrong with the final negotiations for shows in DC > AV, so instead of abandoning their phans in the Midwest, Phish opted for a three night run at UIC. Although I was bummed out about missing four shows in an old-fashioned DC-AV run, the three indoor shows UIC were absolute face melt-fest (see my UIC recaps - Night #1, Night #2, and Night #3). At the time, I couldn't have thought of a better place for Phish to play, but deep down I missed the outdoor vibe of Deer Creek and the intimidating sloping lawn at Alpine Valley.

Regardless of why Phish skipped DC > AV last year, they will return to both venues this year. Four shows in a row. Thursday and Friday throwdown at Deer Creek. Then a Saturday and Sunday blowout at Alpine Valley.

Man, I get chills when I think about the insane Deer Creek run I caught in 2000 anchored by the infamous Moby Dick show.

The last time Phish played a four-show run at DC > AV was back in 2010. I attended all four of those shows with the Cincy Deadhead crew. Guess what? I'm seeing all four shows this summer once again with the same Cincy crew with a cameo from the one and only Daddy (aka @Snailtrax). If it ain't broke, then don't fix it. The only downside to this segment of tour is that I'm not seeing any shows with the Joker, nor my girlfriend (@Change100) until Leg II. The Joker and I caught some of the better shows in the 2.0 era during Phish's Deer Creek run in 2004.

I just re-read our recaps of the last shows at DC-AV. Tons of funny stuff in there, but some truthful elements too like Phish going off the rails in the first Deer Creek show after suffering from an obvious hangover after the majestic Telluride shows. I don't think I slept that weekend (listen to a couple podcasts we recorded at our condo) and I still can't stop laughing about the Joker's infamous Ganja-la incident. After a raging bender in Telluride, by the time I arrived at DC, it was like 110 degrees in the lot and I had run out of gas! By the way the first set at DC sounded, it appeared as though Phish ran out of gas too.

I'm getting pumped for the next four shows to cap off the Midwest segment of this tour. See ya in the lot.

Oh, by the way, it's gonna be hot hot hot the next couple of days. Party smart. Stay hydrated. Get lots of rest. Limit your exposure outdoors during these extreme temperatures. And don't forget the Golden Rule of Tripping Balls: no matter how schwasted you are, you cannot fly.