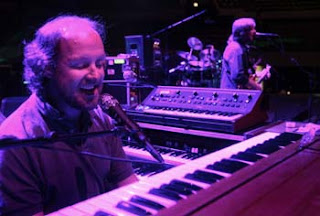 Rehearsal photo by Jay Paul
Butter Room posted some pics of Phish during a rehearsal. Look at all the smiles! Smiling is infectious. And I've been grinning ear to ear since I arrived in Hampton.

Nicky (aka Change100) and I made amazing time driving from NYC to Hampton considering the traffic in DC and three stops (two piss/smoke breaks and one lunch/gas break). I prepped for the possibility that the rental car came without an AUX outlet for iPods. These days it's a coinflip on what model you get. I went old school and packed a case with CDs. I had not done that in a while and picked out 15-20 of my favorite Phish bootlegs from over the years.

The rental car actually had an iPod outlet but we decided to listen to Phish bootlegs anyway. Nicky wanted to get familiar with some of their lesser known material and I wanted to listen to some shows that I attended many moons ago. Albany. Deer Creek. Miami. Japan. Phish and their music accompanied us on the entire drive. Even when we tried to listen to something else, I asked Nicky to put in more Phish.

The Joker had arrived ahead of us. He flew into Norfolk and had a ticket to the Disco Biscuits. Their show was sold out so we decided to rest up. I needed to catch up on sleep because I knew I'd get none once the festivities kicked off on Friday afternoon.

The hotel made me sign a waiver that I would not throw a party in my room. I signed it as "Page McConnell." There were a few heads wandering around and someone has some dank nugs on them because it stunk of the elevator. Nicky and I waited for the elevator and it opened up. A woman and a man (non-Phisheads which I referred to as civilians) joked that, "The elevator smells like a skunk."

I smiled and nodded to Nicky.

"Just wait 24 hours when the entire hotel smells like a coffeeshop in Amsterdam," said Nicky.

I woke up this morning like a kid on Christmas waiting to opening up my box of Phishy gifts. In less than 12 hours, four of my favorite musicians will take the stage for the first time in 4.5 years and expose their souls, guts, and heart for the fortunate fans who made the trek to Hampton for the Phish reunion.

Ooooh... before we head to the Mothership, I have a little time to play online poker to help pay for those pricey Phish tix.
Labels: Phish

ericwyman said…
Pauly - You doing setlist to twitter? @phishhampton is going to be too much to bear come nightfall with all the re-tweets.
3/06/2009 1:19 PM