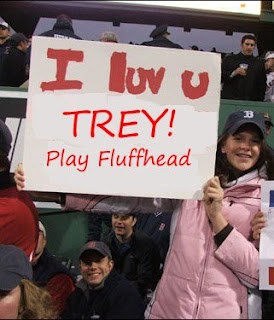 I have been hearing whispers about Phish at Fenway Park for a couple of weeks. Yes, Dave Matthews plays a two show run on May 29-30 at Fenway Park in Boston and for those two nights, the historic ballpark will be filled with Sox cap wearing frat boys and sizzling hot hippie chicks who shave their pits and wear Victoria Secret thongs. However, the intertubes have been buzzing that the stage will be left up for one more night as Vermont's own Phish will perform at Fenway on May 31st June 1st.

My boy Kid Dynamite keeps texting me... "You heard it here first."

I'd say that the validity of the rumor is a coinflip... 50-50. I only say that for pure selfish reasons... because I'm a Yankees fan and I have to work at the WSOP in Las Vegas on June 1st and I really wish that the boys did not play Fenway since I won't be able to see that epic show.

But, for my friends in New England, I hope that rumor comes true.

Obviously, don't believe anything until you see the announcement on Phish.com.

Kid Dynamite sent me another text as I wrote this post. It said, "I got the tip from inside the Red Sox organization." Hmmm.... that's ups the validity of the rumor to 75%. Unless his "inside man" is Manny Ramirez, which in case it would drop the rumor down to 25%. Then again, if there was any MLB player who would have an 1/8th of nugs in his pocket while playing in the field... it would be Manny. That's why he's in LA. For the buds...
Labels: Phish

Henry Holland said…
As an Angels fan, I'd like nothing better than to see the Red Sox and their shitty little stadium wiped off the face of the earth for all eternity* but if this happens, it would be nice for the New England phans.

Hahahaha. No, actually I've always held Gene Mauch, that over-managing Sabremeterics-before-there-were-Sabremetrics dillweed responsible. He pulled Mike Witt, who was their stud that year, with 2 outs so he could "play the percentages". Brings in a lefty, he hits Gedman, brings in Donnie Moore (RIP, dude) whose arm was about to fall off and boom!

What's funny, is a lot of people forget that the Angels tied the score in the bottom of the 9th; they had a runner on third with one out and DeCinces at the plate. The Sox relief pitcher was shitting bricks so what does that scumbag former Oriole (see: 1979 playoffs, game 4) do? Swings at the first pitch, pops up on the infield, Sox escape and win it in the 11th. The Angels go to Boston and get smoked in games 6 & 7 and there you have it, Gene Mauch: 1986 Angels + 1982 Angels (more overmanaging, with a 2-0 lead in a best of 5) + 1964 Phillies = biggest fucking choker ever.

Techmo said…
Not to start my own rumor here but, if this were true, wouldn't it make sense if one or more of them showed up at Mountain Jam with the Allman's again? It would be the day before the fenway show.

I know a lot of people in and around Fenway Park. People who work in the Front Office, the Ticketing Office, One of the heads of security, The guy who works the LF Scoreboard, (Chris Elias) Boston Cops who work that area and people on the Neighborhood association board (probably the most important group listed here).

I'm also part of that foolish VIP-NATION (Live Nation)and have my own "Rep".

This rumor has be dismissed by everyone.

- The neighborhood association, who probably have the most input have heard nothing.
- My friend who is a senior security supervisor said that its not happening.
- The Boston PD has not been informed of anything in the area (other than DMB)
- Front Office can confirm that four dates were held for a concert (DMB), but that is standard for acts prior to releasing their touring schedule...and that the dates are not transferable to other bands, even if they share management. (the 3rd and 4th dates being 5/31 and 6/1)

Not one person who is fluffing this have an official source. If you do, come forward. You dont have to reveal said source, just confirm that you have one.