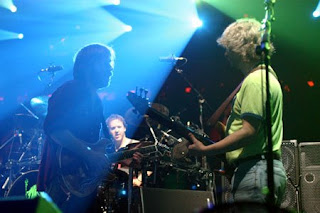 Rookies go to the bathroom at setbreak. Veterans hold it in or sneak off to the bathroom at the first hint of Bouncin. In the era of pre-blogs, I used to write up mini-reviews in lengthy emails to my friends who were not on tour. I usually had internet access a few days a week, so it was not uncommon to write an email with three different reviews, setlists, and other hijinks that occurred while I was on the road. I started referring to certain songs as "piss break" tunes and when we went to shows together, my friends often joked "Is this a Pauly' gonna take a piss song?"

The best placement of a piss song is usually the next to last song before the first set or early on in the second set. That way my bladder has been emptied and I can fully enjoy my time at setbreak to hang out and relax and collect my mud after getting my brain fried by a set of Phish.

This is self-explanatory. Bouncin' is a controversial tune. It's adored by some fans and loathed by others. I understand why the boys play it and it gives me an opportunity to rush off to the bathroom and if by chance Bouncin' is played early in the first set, then it becomes a "Pauly's gonna smoke a bowl" tune. My favorite Bouncin' momement happened during college at a friend's party. We were all hanging out in Lerm's bed room and when Bouncin' played, we all jumped up on his bed. A dozen of us... jumping up and down and screaming. The door was closed and someone opened it up and the rest of the party peeked into the bedroom and spotted us jumping up and down like little kids. Oh to be 20 again!

Out of all the piss songs, this is my favorite. However, there are times when you have to make sacrifices in life. If a Phish show is like a chess match, then Waste is a mere pawn that you give up to make sure your heavy hitters are protected. Piss during Waste or miss Wolfman's? Easy choice.

When Velvet first appeared on the radar, I used to dig it. However, I grew increasingly irritated during Phish 2.0 when they cheesed out shows with a Velvet Sea encore. If played at any other time, I hit the head. Of course, I was near tears at Coventry when Page could not sing the song and Fishman had to step up and carry the lyrics.

Kung freaked me out once. Maybe it was Trey's screaming or a bad batch of mushrooms. Regardless, I have dark haunting memories of that song and often wander around for the duration and return just as it's finishing up.

As soon as I heard the first note to any of those songs, I bolted for the toilets. Phish liked to build peaks and valleys in their shows and Anything But Me is a definite valley along with those slow Trey songs that appeared during Phish 2.0. At Alpine Valley, they once played two of those songs back-to-back which ended up a good thing because it took me ten minutes to walk all the way up to the top of the hill to reach the toilets.

* * * * *
Everyone has one song that they don't like and will use that song to sit down, smoke a bowl, get something to drink, fill up a water bottle, or take a leak. Of course, I will not be posting Top 5 Phish Shitting Songs. If you have to take a dump during a Phish show, you're pretty much fucked.
Labels: Phish

Henry Holland said…
I'm a rarity among Phisheads: I'm there for the songs, not the 20 minute one-chord funk jams. So, for me, piss-break songs are things like Gotta Jibboo or Sand, the bonus being that they're usually about 10 minutes long, so there's plenty of time to take a leak, get a beer and relax.
3/04/2009 12:02 PM

Parker said…
I had beer songs for the Grateful Dead. Never had any for Phish. I've seen the rare interesting Bouncing, etc. and never want to miss anything.
3/04/2009 3:04 PM

Peter Griffin said…
if you would have left during velvet sea at Coventry you would have missed the most emotional moment in Phish history. Never leave a Phish show
3/05/2009 9:28 AM

John said…
Agreed on the #5 slot. I've always loved Bouncing though, and Velveeta cheese really grew on me over time, though the sentimentality is over the top in that one. My #1 is definitely Meatstick. That song makes me truly embarrassed for liking Phish. Jaboo annoys the shit out of me, too. Truly cringe-worthy.
3/05/2009 11:51 PM

Kid Dynamite said…
pauly - did you ever see the special on TV where Phish did Bouncin' with some African tribal band that didn't even really speak english? they all just rocked it together - one of the coolest things i've ever seen.

my other favorite live improved moment was when they did Tears of a Clown with that random girl out of the audience singing... at first it sounded like it was gonna be a trainwreck, but then it all came together at once - i get chills...
3/07/2009 11:18 PM