I was not able to make it out to Camp Bisco this year, but many of my Colorado and Florida friends did and by all accounts it was amazing. Everyone I have talked with said they had the time of their untzy lives.

Our friends over at Hidden Track have some excellent coverage, so be sure to check that out. HT linked up this very well put together video from Camp Bisco that features the ridiculous light rig and lasers: 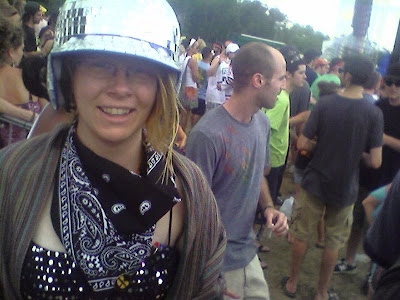 Here are some of Tawny's comments:

"Camp was amazing. I can't speak highly enough of the festival, the lineup, the security, just everything. [Becasue of] a lightning and rain storm we got 1 less Bisco set, but it didn't matter. The set we got that night was EPIC. The lazers were out of control an the rain falling through the lasers was just jaw dropping. The lightning storm was a treat. [During the storm on Saturday] we kept howling like animals everytime a big streak would crack down! It was quite exhilirating. Being in Colorado we don't get those absurd lightning/ thunder/rain/ wind storms....quite the treat! I don't think a single person cared it was raining so hard. Everyone's jaw was dropped, heads straight up watching and a lot of fuck yeahs were heard every time the sky lit up!

The helmet brought me so much attention! People were amazed when Chris would go into long story bout how the helmet was forged in the depths of the campground that morning. Ween was incredible!! Really incredible. Same w/ Thievery. There were secret rager VIP sets- Every other campground or RV seemed to have a PA system w DJ's playing all day and night. I keep trying to find ways to describe it and just can't find the right words or phrase.

That is just the tip of the iceberg. I am serious about going in an RV next year and dragging everyone i can with." 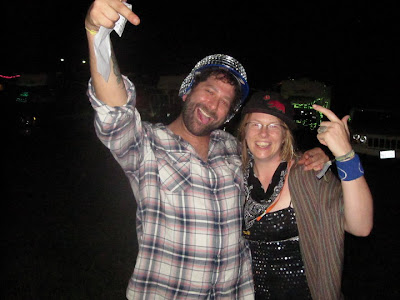 ...and the infamous Panda was on the prowl late night in the Colorado Campground where Orchard Lounge played a not so secret or private set... 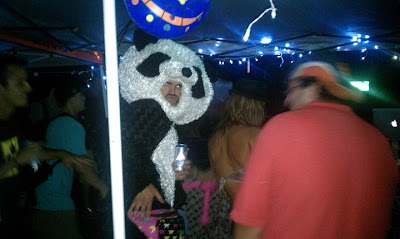 ^^Is that the OL set? There was absolutely nothing private about that, by the way. Fun though.

marc brownstein got to try on tawny's disco helmet!