Our crew flew into Portland on Wednesday and all of us felt the previous work week combined with non-stop partying with String Cheese Incident Red Rocks shows had caught up with us. I went to bed early and got up Thursday morning feeling excited and refreshed. We were on the road out of Portland by 11am and after a short 35 minute drive we exited off the highway and followed the caravan of RVs and cars with jam band stickers towards Horning's Hideout.

To call Thursday Day 1 is a little misleading - yesterday was a travel day and warm-up for attendees and musicians alike. As we entered the beautifully lush grounds at Horning's Hideout excitement was in the air. Everyone spent the afternoon setting up their camps and finding friends. The large trees, moss, ferns and stream greeted us with open arms and one can't help but feel fortunate to get to camp in such a beautiful place. 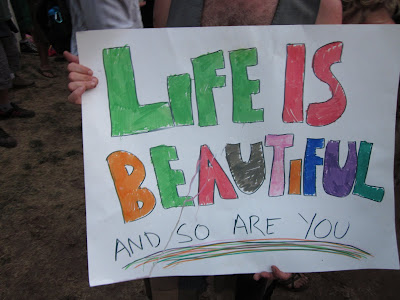 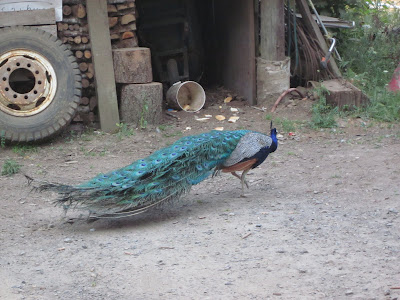 Horning's Hideout is a clever maze of trails though rolling hills, streams, and 70 year growth pine forest. The crowd of 5000 is relatively small and it is easy to run into friends. Group hoots broke out through the woods in 20 minute intervals and even though there was no music playing in the afternoon everyone had a huge smile on their face. It only takes a short time at Horning's to realize this is one of the best, if not the best, place to have a camping music festival in the country and something special is going to happen here this weekend.

Thursday night was a showcase of the String Cheese Incident side projects with Kyle Hollingsworth Band starting at 4:15, CB3 w/Michael Kang at 6:00, Emmitt-Nershi at 7:45 and EOTO closing down the Main Stage 9:30-11pm. About 4:45pm we wondered into the main stage area where Kyle Hollingsworth Band was jamming out an excellent version of the Talking Heads' This Must Be The Place (Naive Melody). There is an excellent vending area around the Main Stage and the music served as a perfect soundtrack to find some food, socialize and look at the creative wares being sold.

Emmitt-Nershi brought out most of the attendees and the crowd kicked up a cloud of dust dancing to the furious bluegrass picking. Emmitt-Nershi focused on songs from their new album with a few old favorites mixed in. Highlights were strong versions of Catfish John and Barstool.

The sun had gone down and Hornings was ready to get dirty. Glow toys suddenly appeared everywhere as EOTO hit the stage at 9:30. Out of the four Cheese side projects EOTO is by far my favorite. They have become masters at the craft of creating live jamtronica. After relentless touring the past few years Michael Travis and Jason Hann can effortlessly keep the groove going without being redundant.


I was wearing a Wook Patrol vest last night and during mid set at EOTO I had a major Wook Patrol incident. A 22-year-old cute blonde was next to me shining her green laser pointer at the stage. I reached over without hesitation and snatched if from her hand.

"Don't shine the laser pointer at the stage!" I scolded. I kept repeating myself and used the turned off laser pointer to emphasize my point, wagging it in her face. The first five times I told her to not point the laser at the stage I was answered with mumbled excuses, which just made me continue my simple message with more intensity.

"Don't f-u-c-k-i-n-g point this at the stage! Its not f-u-c-k-i-n-g cool to shine a laser pointer at the stage!" I repeated. I unleashed years of frustration with the green laser pointer guys on her, admittedly my emotions caught both of us off guard. Finally it seemed she got the message and looked as if she was going to cry. She read the Wook Patrol logo and looked down at the ground, ashamed. "Hey im sorry," she offered. "But im just having a good time and you really killed my buzz" she whimpered.

I gave the pointer toy back to her and embraced her with a strong hug. "Its okay, just don't do it again. Have a great rest of your weekend." Tough love, but I feel certain things in this scene need to be regulated by the community and though we will never win the war against green laser pointers, that sweet girl will never shine hers at the stage again. 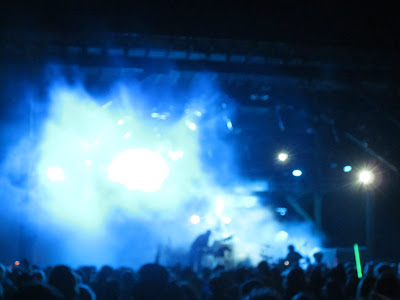 EOTO played straight up to their allotted time and I felt like I was just getting going. At 11pm we wandered over to the Caldera stage where Garrett Sayers(Bass - Motet, magicgravy, Kyle Hollingsworth Band), Dan Schwindt (Guitar - Kyle Hollingsworth Band), Dave Watts (drums/ Motet, magicgravy, Kyle Band) and Eric Krasno (Guitar/Soulive, Lettuce) were throwing down funk standards. A large sculpture with flames lighting its outline glowed and made it easy to mingle and find friends in the 300 person crowd. Kyle Hollingsworth showed up to jam on a couple of songs and Jans Ingber (Motet) added vocals. The highlight for me was Krasno ripping up the Beatles classic "Get Back", making his guitar sing each note of the melody in the vocal. It was a fun show but I often wished they turned up the volume.

The funk band took a break and there was some sort of elaborate geisha show called Tsnamurai next. There were samurais in incredibly intricate armor and a variety of Japanese culture themed costumes. Tsnamurai went on a little too long, much like a movie based on a short Saturday Night Live skit. Cool at first, but just too long.

The funk band came back for a second set and they went into a couple funk jams I have heard Sayers and Watts play with magicgravy. A very chill late night scene, the music ended at 2am and as I walked back to my tent most of Horning's were taking it easy and going to sleep early, saving energy for the String Cheese Incident throw down tonight.
Posted by the joker at 4:20 AM

You took battle one of the green laser for the good guys!! No shame in thrashing wook buzzes due to party fouls.