Skip to main content
Labels
Posted by the joker July 08, 2010

“What are y’all doing out here?” the Alpharetta police officer asked us.

“Just having a party, officer.”

“Ive had a report of a firework going off on a car in this parking lot, y’all know anything bout that?”

“Yes sir, we saw that firework go off at the other end of the lot, but we were not involved.”

“Why do I smell marijuana? Who is smoking marijuana?” the officer asked in a more accusing tone.

“None of us are smoking, officer,” one of the girls replied who was wearing a wook patrol vest. “None of us even smoke.”

“Well, weve been around it – we were at a concert tonight.”

“I know where you been! I worked that Phish show tonight!” the officer scolded us.

“Officer, we are just dancing out here,” I offered.

“Who are you, Mr. Wook!” as he read off of my wook patrol tshirt. “Why don’t you sit down on that tailgate and shut up!” 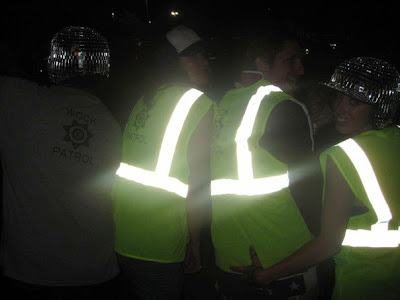 At this point I thought I was going to get interrogated or searched. I certainly wasn’t hiding as I sat there in my shiny disco ball helmet and pants. I did as he said and kept my mouth shut.

Then the tone of the officer changed. A little more calmly he asked “Y’all staying at this Hotel?

“Yes sir!” we all replied in unison.

“Well it just so happens that I am here to investigate a loud party and marijuana smoke on the third floor. But I guess...that isn’t you, because you are out here in the parking lot,” the officer thought out loud.

Nice detective work, I thought to myself. I grinned at the officer.

“Listen, I don’t have a problem with you dancing and listening to music out here, but If I have to come back or if you are smoking marijuana, we are going to have a problem.”

The officer got back in his car and circled around to the front of the hotel and walked inside. I looked around and the 30 or so partiers had left; the boombox was blaring Burning Down The House to an empty dance floor. My heart was racing a bit but I had a smile on my face.

After the police bust I needed to use the men’s room and wanted to check out the scene. There were only 8 of us left in the lot and I walked into the lobby.

To my surprise and amazement some dude was playing guitar and Disco Sis #1 was playing Violin. DS1 is a classically trained and talented violinist but has performance anxiety. She had never played for any of us; I was stunned and excited to have stumbled upon the moment. It was 3am and DS1 was playing a gentle, beautiful melody over a three chord guitar progression and a girl was scat singing over them.

I listened for a few mintues then ran outside as fast as I could to the rest of our crew, still in the lot. “Pack up our shit! Come inside! DS1 is playing violin with some kids in the lobby! Get in here, now!”

I ran back in as the rest of the group packed up the boombox and the cooler. As I got back inside I approached DS1 and let her know that I saw her play. She blushed and was embarrassed.

“It was beautiful. I am so proud you did that. Please do it again,” I encouraged her.

The original guitarist and a cute spun out blonde played a couple more tunes while about 20 people assembled in the lobby, spread out on the plush couches and chairs. I approached the guitar player and played Cities on guitar with the spun blonde fiddle player. She was faded but Cities was an easy sing along.

“Disco Sis, we are going to play a song together whether you like it or not,” I demanded.

DS1 accepted the violin and looked into my eyes. She was nervous but ready to play.

“Lets try Karma Police.” I started the intro chords and heard a few claps. I began the verse and it was a sing along. "Karma Police, arrest this man..." everyone sang, with the encounter a few mintues earlier still lingering with us.

DS1 soloed after each “This is what you get...” and the end coda of “For a minute there, I lost myself! I lost myself!” had everyone singing along a the top of their lungs. It was one of the highlights of my year and I nearly cried as I hugged DS1. DS1 played a couple more songs with the spun out blonde chick. It was beautiful. DS1 conquered her fear. 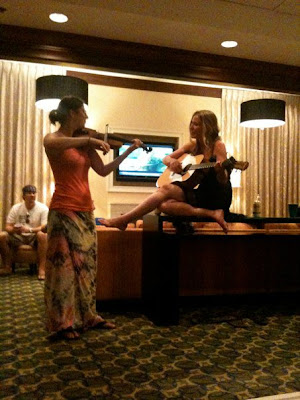 By this time it was 4 am. I put on Tipper and we continued to drink and dance in the lobby. Dr. Pauly came down and said his goodbyes and caught his cab to the airport at 4:45 am. The pool opened at 6am and we moved the party out there and I put on some Emancipator for the sunrise. 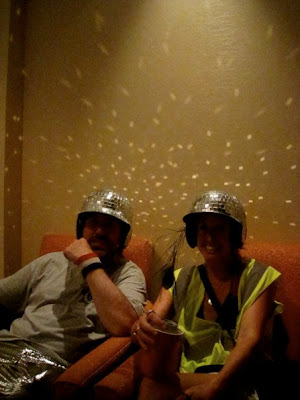 At some point a fellow partier who was wondering around the conference center came back to the group laughing hysterically. “You have got to see this!” he told us in uncontrollable laughter. “There are two wooks back there sleeping on couches in the conference center!”

The hotel had a conference center that sat vacant for the weekend. A long hallway lined the perimeter of the conference center and we walked around to the back. There, in the corner, we heard snoring and there were two wooks passed out on the plush couches. One had a sleeping bag. The other laid shirtless. Both had dreads.

We giggled and walked closer. In an instant, we all stopped. The smell was repugnant. It smelled like rotten food. Death. The New York City subway.

We covered our mouths and walked away, shaking our heads. Even the nice hotel was not wook free. These wooks were very clever indeed.

Finally I left the party around 7:30 am and headed up to our room for a couple hours of rest until Broseph woke us up and took us to the airport. Here is the pic DS1 took of us as she left the room to catch a ride back to Charlotte around 8 am: 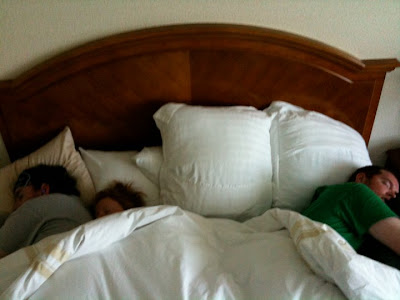 jesse said…
great reporting of what sounds like an incredible time....glad you guys all had such a fun time, and especially happy that you so eloquently document it and share it with the rest of us. Thanks and keep up the great work!
7/08/2010 1:39 PM

DiscoSis1 said…
thanks to everyone for providing a safe & loving environment for me to conquer my fear in. "Do one thing everyday that scares you!"

mikey freshh said…
beautiful music and beautiful people! a night to remember. thanks for the memories.
7/08/2010 4:56 PM