Skip to main content
Labels
Posted by the joker July 06, 2010

Normally we rely on Dr. Pauly to do the recaps of our shenanigans but as you know he is hard at work covering the World Series of Poker, so I am going to give it a shot.

The crew assembled in Raleigh at Disco Sis 1's home around mid day on July 1. Jonas and I flew in from Denver; Broseph and Strawberry Shortcake had driven up from Florida, and Dr. Pauly had flown in from Las Vegas. Katie joined us with her so called black sheep nephew, William Miller. It was William's first Phish show and we were excited to educate him on the music and the scene. Jonas and I passed on the infamous "Dubya Loves Phish/Because Mike Drops Bombs" tshirt for him to wear.

We put the finishing touches on the Coventry Crew Lot Table, a table that had been donated from Senor's family in CT on tour in 2009. The Crew created an artistic top using colored tape. Pic 1 2

We headed out to get a spot in the lot at Walnut Creek. By pure blind luck we parked in lot B next to a huge grassy area that was shaded and quickly set up the music and chairs for the pre-party. Jonas and William Miller were on wook patrol, I got iced by Disco Sis II, and we had a great time pre-show. 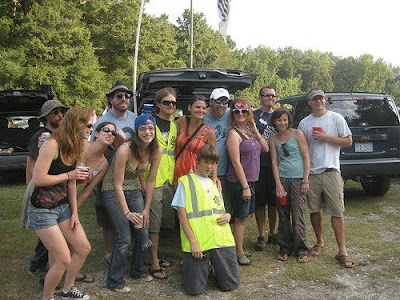 I was in the pavilion with DS1 and her boyfriend for the first set. As soon as I found my seat the guitar riff of Llama blasted me into a jumping and dancing frenzy. I think I scared and excited the people around me at the same time as I jumped up and down to every riff of Llama. Roses are Free followed and of course I was loving it. After starting the set off with such high energy, I felt the rest of the set was a step down until Divided Sky. DS1 and I felt the energy rush through the pavilion 3 times during the pause in Divided Sky. I tried to get DS1's boyfriend to dance during Moma Dance and I showed off my moves when our neighbors behind us left the set early during Cavern.

During set break I bought a poster and ate some food but got separated from everyone else. Phish shows are fun because of the crowd, but they can also be frustrating when its hard to find your crew. Towards the end of set break I found Jonas, Drew, and DS1 but the lights dropped as we headed back to the pavilion to the seats. As I was getting my ticket from my wallet I got bumped in the crowd rushing to the seats and my debit card fell out. I found my row but it seemed a group was in our seats; I continued down the row and found a space of 4 seats all to myself but lost DS1.

I was a bit frustrated during Backwards Down The Number Line as I realized I lost my debit card and my friends. But I had a sick spot, center of the pav right behind the tapers and I had room to dance. I decided to just enjoy the show and not worry about anything else. I think by deciding to be present I was able to open myself up to what Phish was going to show me. I was alone in the sense that I didn't know the people around me; but I was not alone in the sense that everyone around me was as into the music as I was. You can hear me talk about my religious experience during Have Mercy> Light Up Or Leave Me Alone> Free> Velvet Sea here.

We headed back to DS1's house and started up the dance party. Jonas and fifteen year old William Miller took the reigns in djing the late night dance party. We were all impressed with William's dance moves and DJ skills. Look out ladies- William is going to be a killer in a few years and he is clearly an old soul. After the show it was just a fun time dancing and hanging out as a family. We could have partied all night but we decided to get some rest as we had to travel the next day an most of us were tired from our flights that morning.
Labels: Phish Raleigh Walnut Creek William Miller