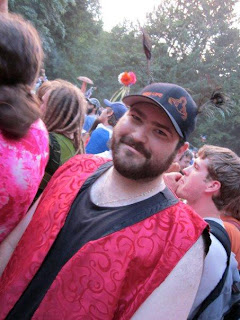 The Wook Patrol returns with episodes recorded from the campgrounds at Horning's Hideout for the Cheese festival in Oregon. The Joker and Wildo are on hand and throwing down all weekend.

Episode 9: Phantasy Wook (1:17) - The Joker interviews his buddy Jared about a game he's been playing called Phantasy Wook, something that they just made up and it sounds like a great opportunity to gamble on wookish behavior during a festival.

Episode 10: Wildo's Friday Recap (2:00) - The Joker chats with Wildo about the highlights of the opening evening of SCI's Horning's festival that Wildo describes as "The biggest family reunion... ever."

Thanks for listening to Coventry's podcast The Wook Patrol. You can check out the first six episodes of our Wook Patrol podcast that we recorded during the final four Phish shows in the south earlier in the month.

Check out the other two SCI-related episodes that the Joker and Wildo recorded at Red Rocks last weekend.

And thanks to Dan from Pokerati.com for FTP hosting.
Posted by Pauly at 4:20 PM