I woke up about 9 am and the campgrounds were still a cool and crisp 60 degrees. It was such a nice festival morning compared to the other camping festivals I have attended the past few years in the south. We mingled around the campsite for a little, ate a light breakfast and then went to yoga class. Yoga was attended by about 200 people and it was exactly what I needed. I loosened up my weary legs and set a positive intention for the day. 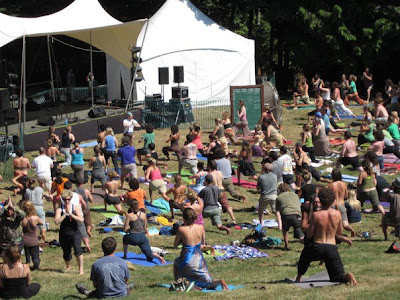 One of the great things about the expanded stage setup of Cheese Horning's this year is the series of workshops and talks held in the afternoons each day. I missed Jamie Janover's talk about physics and how everything in the Universe is all connected. Several of my friends did go and they were all extremely excited and empowered after hearing him speak. Life, death, energy, matter, space, time, dimensions…they were all discussed and Carrie's mind = blown.

My friends Alie and Roz are very creative and funny couple I met last year on Jam Cruise. They have a collection of stuffed animals they carry with them to shows. I met Schwilly B. Monkiee on Jam Cruise and at SCI Red Rocks I met their sock monkey Tom Hanks. Tom Hanks has a army helmet as part of his costume because he is Tom Hanks from Saving Private Ryan. I took some time to make Tom's army helmet into a disco ball helmet on Friday afternoon. 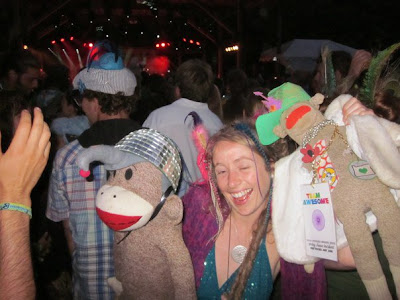 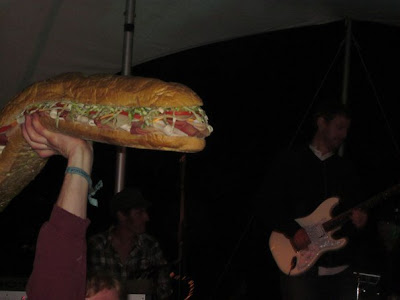 I was lucky enough to get a shot of Deli sporting the disco helmet I made for Tom Hanks with his owner. 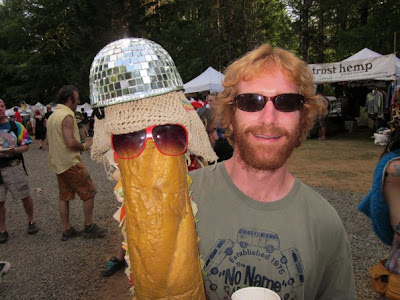 It seemed like I was already having one of the best festival experiences of the summer, and the band I came to see had not even played a show yet. Cheese took the stage and the energy in the crowd was electric. The set list:

# With the Soul Rebels Brass Band

The Smile opener was perfect. Everyone, and I mean everyone at Horning's had a huge smile on their face. The love and joy coming from the crowd and band alike was powerful and unlifting. The jam out of Missin Me was strong but the real fireworks in the first set was the Born On The Wrong Planet > Under African Skies, Climb, Miss Brown's w/Soul Rebels Brass Band.

Kang was layed into the jam in BOTWP, playing long beautiful notes with heavy delay, echo and distortion. The energy from the crowd during the Paul Simon favorite Under African Skies was fantastic. Next came Climb and Kyle laid down some funky piano solos before Kang ripped the shit out of the jam. Miss Brown's Tea house answered the question of whether or not there were going to be any repeats from Red Rocks, but the Horning's version featured the Soul Rebels horns and was a fantastic performance.

Billy Nershi came out in a goofy looking leather helmet with goggles on. At some point he put glow sticks on his head to look like antennae. Set 2 began with Nershi telling the crowd "Prepare for liftoff!", and a guy next to me kept on yelling "We love you space travel Billy!" It certainly felt like we were on a different planet and in a different time - where had this band been for all these years? Cheese is back, folks.

Highlights in the second set included Water with a floyd-esque chill start/stop jam. Nershi sang to us with his beautiful slide guitar that later gave way to a more intense and powerful jam with a release. I loved the dirty funk of Dirk > Jungle Boogie > Dirk. It was straight nasty funk with Kyle laying into the clav.

Most everyone was blown away during the drums section sandwiched in the middle of Bump & Reel. The front four walked off stage and left Travis and Jason on stage to do their thing. Instead of taking the music to an EOTO style jam Jason Hann showed off his incredible skills with the congas and djembe. Usually when Panic or the Dead play drums it is a chance to go to the bathroom or get a beer- not last night. Hann had everyone grooving and my jaw was on the ground when Hann started scat singing over his furious rhythms. To add to the fun Nershi teased the crowd from back stage asking through the mic "What did he say? What did he say?"

The encore featured the Soul Rebels Brass Band once again and Cheese transformed Hornings into a New Orleans funky dance party with an excellent version of The Meters "Hey Pocky Way." Hell of a first night, indeed.

Beats Antique played immediately after Cheese ended at a second stage close by. I was impressed by the first part of the set but left early to go back to the camp site and chill out. The rest of the night was spent wandering through the campsites, playing guitar with strangers, finding old friends and making new friends. Carrie carried her jellyfish umbrella, complete with reflective tape and a black light. As we wandered through the campsites the jellyfish was a mini celebrity among the happy cheese heads.

My friends Nancy Shennaniganz and Hillski were at String Summit 2 weeks ago, also at Horning's Hideout. We got the idea for them to bury treasure for us to find during Cheese Hornings. Hillski drew a map, sealed it, and give it to me to keep safe until we got together to hunt for the treasure at dawn. 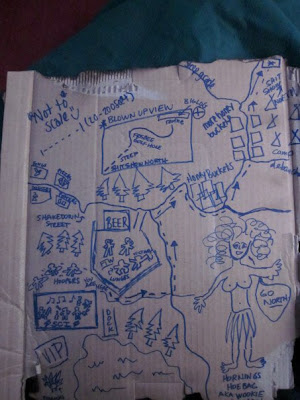 A weary spun out and drunk group gathered as the sun came up and we opened the map. The treasure hunt took about 30 minutes to complete, mostly thanks to our guide Rachel. The treasure was an assortment of costumes, kosker sea salt, wet wipes, and other inside jokes among the group. I am excited because I got the bug glasses - they are just plain goofy to wear and im excited to add them to my prop collection. 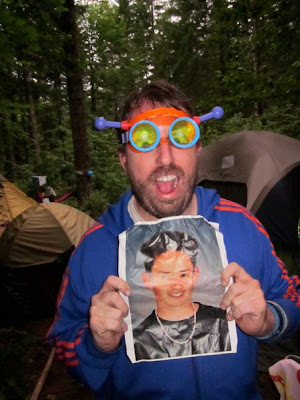 Its hard to believe we have another 2 nights of Cheese - we are having an amazing time, the weather is mild, and the vibe is friendly and overflowing with love. I expect tonight there will be more eye candy and theatrics...stay tuned!
Posted by the joker at 4:20 AM

aaahhh! I'm so jealous. I was at Hornings for String Summit and had the time of my life, but couldn't stop thinking about how wild Cheese would be...

Thanks for making me feel like part of the action!

aaahhh! I'm so jealous. I was at Hornings for String Summit and had the time of my life, but couldn't stop thinking about how wild Cheese would be...

Thanks for making me feel like part of the action!