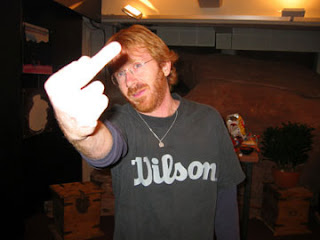 Phish can't win. The haters hate everything and the converts can never see their heroes do any wrong. I've seen 222 shows and it all boils down to this...on any given night Phish can/will smoke the shit out of the room/venue, but sometimes, they have an off night or take a risk and fall short of the mark. That's the beauty and magic of Phish and why I travel all over the place to see them because you never know what you're gonna miss if you decide to skip a show.

It's hard for me to tell you about my Top 10 shows of all time. Sure, I can blurt out a few off the top of my head (Millennium show, Fukukoa, Gorge 98) that I absolutely loved but in all honestly, it's hard for me to come up with more than a handful of shows that I thought were utterly awful. Well, you know one of those shows that I thought sucked camel balls -- the third and final night in Broomfield, Colorado. And let's not forget about last summer and that first set at Deer Creek after Telluride was a trainwreck. Don't think that the band didn't notice their subpar performances because Phish definitely bounced back with authority from both missteps and as a result I got treated to a couple of fantastic evenings: the two-night throwdown in Charleston as a response to the Broomfield bomb, and the smoking Alpine Valley shows (Night #1 and Night #2) that got the band back on track after derailing in Deer Creek.

In short, sometimes you can't have the good without experiencing the bad. Lucky for us, Phish has played substantially more epic shows than ones we'd rather not speak about so to not upset the herd.

It was a bad beat because it was my first and only show in the company of Dr. Pauly!

6/25/00 terrible. just terrible. whats the use and uncle pen. heavy things and no sense of segues. good jibboo and melt. but damn, thats a stretch even there

7.26.99 Deer Creek...lackluster tour closer...oh an some heady chick that couldn't handle her shit splattered the back of my legs and feet with warm puke not once, but 3 times in the pav.

Let's be honest Pauly... it's one thing when the band takes a shot and misses. Obviously that's the nature of improv. What's been bad for me has been the relatively riskless nature of 3.0. Sure there've been moments (Ghost NYE) but for the most part you know what you're getting when a song starts and that's the worst Phish by far.