Around noon on Day 2 I woke up and made my way to the pool deck. It was a beautiful day, sunny and 70 degrees without a cloud in the sky. I found it was a perfect time to sit, sip some drinks, listen to music and have craft time. I brought materials to make disco ball helmets with my good friends JD and Coteff during Cornmeal and Sierra Leone Refugee All-Stars.

Earlier in the year I had mentioned to my buddy Brandon about an idea for Jam Cruise - Unicorn Polo. The idea was for us to have unicorns on a stick and run around playing an imaginary polo game. Brandon headed up getting shirts printed up and we wore them during the afternoon Dumphstaphunk set. A group of girls from Austin headed up by Michelle had decided that they were going to participate in Unicorn Polo, but not with the Unicorns on a Stick and Tshirts. The austin girls got decked out as Unicorns. They stole the show, as you can see from the pics they looked amazingly hott as unicorns and the whole ship was taking pics. 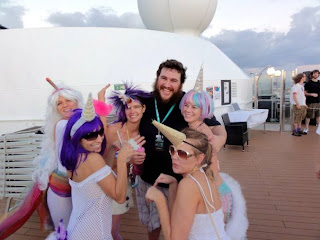 After an afternoon on the pool deck playing Unicorn Polo and enjoying the amazing Jimi Hendrix covers from the Jam Cruise supergroup Some Big Cat From Japan, it was time for a costume change. It was a little early in the evening, but I couldn't wait to get decked out for Future Jam night as Boba Fett from Empire Strikes Back and Return of the Jedi. 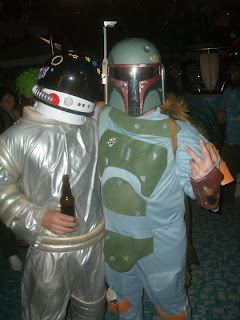 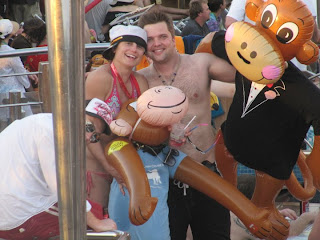 I  have to say that obviously I love costumes, and The Future Jam night was one of the best costume nights I have ever expereinced. It was fun to see the reactions of the staff of the boat as I walked around the with freaks in the Boba Fett costume- they have to think we are crazy. There was a Future Jam Fashion Show, where everyone showed off their costumes. One standout was a guy dressed in a Lucasfilm quality Wookie costume. I think a girl painted in all silver won, but really everyone on the boat who saw the craziness was a winner. Check out the galleries of the pro photographers - Dave Vann, Monaghan Photography, Jeffrey Dupris , Andrew Wyatt and Chad Smith have some amazing shots up on Facebook. Friend them on Facebook to take a look at their Jam Cruise galleries.

Next up in the evening was a trip back up to the pool deck to check out Galactic. If there is royalty on the boat it is most certainly Galactic, who have been on every Jam Cruise. There were tons of sit ins, and as I expected it was an awesome set. I especially enjoyed hearing Bongo Joe, and Corey Glover's (formerly of Living Colour) singing was fantastic. Galactic's pool deck set is definitely on the list of recordings to hunt down.

After Galactic ended we headed to the smallest venue on the boat, the Zebra Lounge, to check out The New Mastersounds. Usually on Jam Cruise there is plently of room for everyone, but not this time. It was hot as fuck, packed, I couldn't get close, couldn't see or hear - the whole boat wanted to be in there. Karl Denson and Maceo Parker sat in with The New Mastersounds and what I heard sounded amazing. I was sweating like a pig in the Boba Fett costume and eventually had to bring back the helmet to my room and take a shower.

After my shower, but still wearing the Boba Fett body armor I headed back to the Pool Deck for Lettuce late night. As I expected it was a classic set of Funky Lettuce. Towards the end of their set they fucked with anyone who may have been tripping and did some sort of dissonant jam that had everyone losing their minds.

After Lettuce ended I went to check out Bujak in the disco. Most of us were calling Bujak a DJ, but he is much more than that. Bujak is an amazing keyboardist who live loops remixes and sounds with his keys live. He has a unique dirty distored tone on his keys and it was perfect for the late night party for Future Jam.

I enjoyed Bujak for a while, but then was going to head to the Jam Room. By now its 4am and traditionally the Jam Room goes to 5:30 or 6am. The rumor reached the pool deck not to head down there because The Jam Room was "closed" because they didnt have any musicians to play. Weak Sauce. The Jam Room closing early that night was really the only minor disappointment of my experience on Jam Cruise 9. At the time I was pretty mad about it. But, as things seem to work out magically on Jam Cruise, since I wasnt in the Jam Room I caught a Brock Butler sunrise set in the Awesome.town area of the Pool Deck.

Brock ran though acoustic covers of I and Love and You (the Avett Bros), Float On (Modest Mouse), Mr. Brownstone (Guns N Roses), the Super mario Bros theme (including the underground theme and made the chime coin sound on guitar) - it was magic. Brock ended his set with Naive Melody, a personal favorite and it gave me goose bumps as we sang "im just an animal, searching for a home"; I truly feel that Jam Cruise is the home ive been searching for, even if I only share that space for a week every year.
Posted by the joker at 4:44 PM

Loving the recaps. You are one organized dude to get all those costumes together and packed plus your crafting supplies.. We should call you Martha as in Stewart.

Kramer still hasn't recovered. I told him there are plenty of monkeys in the sea.

If the "Brandon" you speak of is who I'm picturing...he gave me a pin that says "I give bad advice" and I wear it with pride!

I'm loving your story, you're a good blogger and writer as well:) What do you think about essay writing process overall? How do you feel when it comes to professional writing?