I woke with a start. Where was I? What is that banging?

It took me a moment to figure out that I was deep into the Jam Cruise bender and someone was about to knock down my door. I opened the door to find Andre and the Touch of Class crew filling up the hallway. It was about 8am, we were docked in Costa Maya, Mexico, and there were Mimosas to be drank before we played Jam Cruise Kickball. I got dressed quickly and decided it was time to break out the Disco Ball helmet. I might need some protection in a game of kickball in Mexico, I thought.

We went to a sit down breakfast in the restaruant. To say we were a shit show was an understatement.

Everyone but me had been up all night, and we got to ordering a gourmet breakfast feast along with bottles of champagne and orange juice. If it had been a restaurant in the "real world", we probably would have been kicked out. But on Jam Cruise, this behavior is tolerated. No, encouraged. We ordered at least 6 bottles of champagne for 11 people and drank mimosas. One friend fell asleep next to me while Marc demanded extra hollandaise sauce for his breakfast.

Michelle and Rob had given me a palm sized disco ball to go around my neck, and I got the idea at breakfast that I wanted to attach the disco ball to the top of my disco ball helmet.

"I know its not on the menu," I asked a waiter, "But do you know where I can get a screw?" I was directed to the front desk to talk to a customer servce attendant.

"Do you know where I can get a screw?" I asked the attractive Italian MSC cruise line employee behind the desk. She resisted at first and it was a little awkward. But, drunk at 9am and 4 days into the bender that is Jam Cruise, I wasn't backing down.

"Well dont things break on the boat sometimes? Arent there carpenters or someone like that who have a tool box?"

The customer service girl shrugged and asked me to wait. She disappeared somewhere and I stood by myself in the atrium. She was gone for a couple of minutes and I became bored. There was a ballot box in front of me for the Jam Cruise awards show. I was curious so I opened up the ballot box to read what people had voted on.

I laughed and responded. "How do you know I can't look in the ballot box?!? I'm Lord Disco Ball, I can do whatever I want." I was being a complete jackass. Kudos to MSC employees for putting up with me all week. 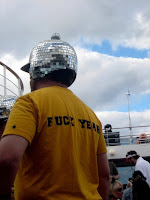 I eventually found a stray screw on the pool deck near the main stage. I attached the small disco ball to my helmet and started telling other Jam Cruisers the story of how when two disco balls meet and love each other...they produce a baby disco ball. How cute.

Hillary organized a bus to take us from the port to a field near the beach in Costa Maya to play kickball. She had even coordinated a beer and food vendor as well as massage tables next to the kickball field. Somehow about 40 cats got herded to the correct bus. We divided up into teams - Up All Night vs Went To Bed.

It was a bloodbath. Up all night kicked our asses, mostly thanks to Adderall. Link to Kickball video - watch me score :12 seconds

Again we were treated to beautiful weather and after the kickball game we hung out on the beach for a bit. I did some shopping and was attracting a lot of attention with the disco ball helmet. Mexican merchants tried to get me to come over to their store, with calls and offers as I walked down the boardwalk. I began to respond to their calls with "Picture with me, $2 dollars."

About 3 o'clock I headed back to the ship. Another excursion off the boat that seemed to fly by.

Back on boat the schedule had Taylor Hicks hosting the Gong Show and ALO doing Rock Star Karaoke. I wanted to check them out but I took advantage of the break in the music schedule to take a much needed nap.

After my nap Lauren, Rob, Michelle and I ate a big dinner again. Tonight was lobster night. Rob explained to our waiter we were in a hurry to get our food, and that we didnt want it brought out in courses. He suggested bringing out the food all at once. We all orderd lobster and filet minon. The waiter responeded by bringing Rob dinner last, and seemingly slower than the service of the tables around us. Finally when our steaks were served we took the steaks "to go" and snuck out of the dining room and up to the pool deck for a few songs of God Street Wine.

We caught most of  Karl Denson in the Theater. Wow, what an amazing set! There were times when some of it sounded like Pink Floyd w guitars ripping, and a few times Karl D stepped back to let the band work. As you would expect, there were lots of guests including Anders Osborne, Tony Hall and Mike Dillon. The last song had lots of horns and it reminded me of a early '00s Trey Anastasio Band jam with horns blaring and guitars ripping.

Next we headed back to the pool deck where the New Mastersounds were playing their unique style of funk. I don't know what it is, but I like the New Mastersounds funk more than the New Orleans funk. Again there were lots of guests - Mike dillon on percussion, Robert Walter on rhodes and the Lee Boys slide guitarist added a lot to the mix.

Still buzzing from the amazing whomp set the night before from Big Gigantic, Lauren and I left the New Mastersounds a few minutes early to get a good spot for the throwdown in the Zebra Lounge. I was fun to see Big Gigantic again, but there was a few repeats from the night before on the pool deck. The sweaty wompy dance party returned. Deitch, Krasno, and Brock Butler sat in for a couple songs and I danced so hard I had to take a shower after the show.

Around 3am I returned to the Pool Deck where The Rhythm Devils were having a Grateful Dead sing along. I ran into The colorado girls dressed as dancing bears and we got into the classic songs. Every over 50 person on the boat was out and getting down. It gave me hope that my knees will be good enough for me to jam to Phish in the middle of the night in 20 years.

I thought the Rhythm Devils sounded great - much better than Bob Weir, and dare I say, better than the Red Rocks Furthur show I saw earlier in 2010. Tim Bluhm of the Mother Hips is a fantastic front man and Davy Knowles on guitar/vocals is no slouch either. Kimock sat in, adding delicate and beautiful guitar licks that complimented Knowles' unique lead guitar. I defintiely want to listen to this one again. 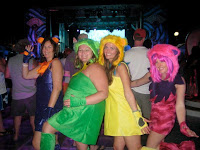 Late night had Bujak in disco again, and jam room packed but I wasnt into either one of those options. I had an hour long spun out conversation about physics with Zeke at the back of the boat, as I was waiting around waiting for something to happen.
Just as I was about to give up hope of something cool happening I found Brock Butler was again playing acoustic on the pool deck. A stray old hippie tried to play guitar over Brock and...well check out Scotty B's account of the morning in his recap, he tells the story better than I can.
Posted by the joker at 11:11 AM

http://www.glidemagazine.com/hiddentrack/jam-cruise-journals-day-four-part-2-brock-completes-the-trifecta-of-sunrise-sets/
from scotty b as my story left off:

"Here’s one story for you, before I go into more detail in a future piece: after playing for about an hour, Brock took what was supposed to be a five-minute break to use the toilet. During Brock’s brief respite, a random cruiser sat down in Brock’s spot with a guitar and started to lay into some tune I wasn’t familiar with and to be honest wasn’t very good at all. I guess this guy thought it was Open Mic Night and we were all debating how to tell this guy to get lost before Brock got back.

Ten minutes later, this guy was going strong as we shook our heads in disbelief. Don’t forget that at this point it was about 7AM and no one was exactly “on point.” The Joker of the Coventry Blog, god bless him, takes a little stuffed unicorn he was carrying around with him and peacefully laid it over the aspiring musician’s guitar strings and explained that we were all gathered from around the country at this late hour to see Brock play and kindly asked him to stop. Joker welcomed the guy to watch Brock’s set and told him it would probably be better if he didn’t when the gentleman asked if he could play along with Butler. None of us wanted to be an asshole, but these Brock sets clearly meant a lot to all of us and we wanted Brock to finish what he started.

After a few minutes of conversing, Joker was able to persuade “the guitar guy” to stop and Brock was able to rock one more solo acoustic set. Butler kicked off his second “set” with a unique cover of Pusherman and about three minutes in, “the guitar guy” passed his guitar to one of the least sober folks assembled around Brock, who plucked one off-key note before our friend Chip yanked the guitar out of his hands and placed it on an adjacent table as far away from the action as possible to the applause of those listening to Brock.

My favorite moment of the cruise came just about 7:30AM as the sun came up over Cuba during the most beautiful sunrise you can imagine as Brock delivered a heart-felt rendition of Home by Edward Sharpe and the Magnetic Zeros. The tune was recorded as a duet, so Brock acted out both the parts before jerking some tears out of the chorus, which hit “home” for those of us gathered ’round considering how close the trip was to ending. When Butler started performing at 5AM there were only about 10 of us at the Awesome.town Table. Shortly thereafter, a number of cruisers including performers Billy Brouse of Papadosio and DJ Wyllys brought over chairs and assembled around Brock. By the time Butler delivered a mesmerizing It Starts Where It Ends encore near 8AM, there were about 80 people eating breakfast and watching Brock play. Black Water in particular turned into a loud and raucous singalong with people belting the “dixieland” refrain straight from their guts. Only on Jam Cruise folks, only on Jam Cruise."

Check out my videos of Rhythm Devils up on You Tube irongirl99. if you havent seen them yet. I took a bunch when they played in my home town. Got a small section of acoustic ripple with Davy on pedal steel. Tim on vocals. Billy K can still bring it as can Micky

"The Joker of the Coventry Blog, god bless him, takes a little stuffed unicorn he was carrying around with him and peacefully laid it over the aspiring musician’s guitar strings and explained that we were all gathered from around the country at this late hour to see Brock play and kindly asked him to stop. Joker welcomed the guy to watch Brock’s set and told him it would probably be better if he didn’t when the gentleman asked if he could play along with Butler."