I woke up on Day 3 without a plan other than I wanted to get off the boat and check out the beach at Roatan, Honduras. Rob, Michelle, Lauren and I negotiated with a cab driver to take us to a popular beach.  It was a quick 15 min cab ride, and we enjoyed the perfect 80 degree weather and sandy beach. We got a couple buckets of beer and swam in the ocean. I wore a Roman Centurion apron to make my abs look good. There were locals walking up and down the beach trying to sell their services and wares to the tourists. I borrowed guitar from a local to play "Cities" for a small group of jam cruisers. 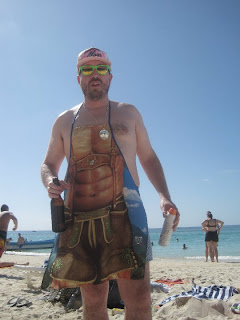 After a couple of hours on the beach in Honduras we headed back on the boat. My legs were starting to get sore and I sat in the hot tub to loosen up my body a little bit. No where else but Jam Cruise can you sit in a hot tub and listen to music on a stage. The Easy All Stars played an afternoon set mixed with originals and their Pink Floyd and Beatles covers. I wish they had played more songs off of Radiodread but their version of Lucky was awesome.

The day seemed to fly by and already it was 6:30pm. We had a big sit down dinner with Lauren, Michelle, Rob, Rachel and Tres. Last year I didnt take advantage of the restaurant and I was very happy to eat some gourmet food instead of the buffet in the cafeteria. I enjoyed a delicious salmon dinner with a large fresh salad. Fuel for a dance machine. Rob encouraged the waiter to keep it moving and we ate in about an hour.

After dinner we headed to the Zebra Lounge  to check out Zach Deputy. It wasn't quite as packed as it was for New Mastersounds the night before, but it was very full. Zach broke out a fun version of Ice Ice Baby and had a lot of sit ins from other musicians on the boat. Zach is a great solo artist, but after seeing him in the Jam Room and sit-ins with other bands, I think (hope) Zach will form a band with all-stars from the boat. Zach really shines as a leag guitarist with a band and has a fantastic voice.

Next up was Big Gigantic on the pool deck. I have known drummer Jeremy Salken since 2005 and first saw Big Gigantic play a house party 2 or 3 years ago outside of Boulder. It felt good to have a connection to someone who has risen up from playing in local bands in Colorado to the largest stage on Jam Cruise. Plus, Jeremy and Dominic are all round awesome guys.

We were all anticipating a great set, but Big Gigantic absolutely hit a home run. They started off strong and never let up. It was a non-stop two hour sweaty dance party. I saw people dancing harder for Big Gigantic than they have for anything else on Jam Cruise 9. The sound was huge and everyone who had not seen the duo before was amazed that there were only 2 people on stage. The Colorado crew was proud and Big Gigantic had their coming out party for the jam band community. Everyone took note of that performance and I believe they have graduated to the next level.


After Big G we continued the jamtronica theme and headed to the late night show with Lotus in the Theater. Lotus always plays their best on Jam Cruise and the Theater set was no exception. I hit the wall that night about 3:30 am and had to go to sleep. My only regret of that night is missing out on George Porter. Jr. hosting the Jam Room, but try as I might I just couldnt stay up till sunrise 3 nights in a row.

second, if you want to check out george porter jr. he is playing in denver with my buddys band, frogs gone fishin, on january 21st at the other side

"try as I might I just couldnt stay up till sunrise 3 nights in a row."

"try as I might I just couldnt stay up till sunrise 3 nights in a row."

The latest happenings in the world have become very easy to share with others in seconds and blogs are the best at it.

I'm fond of your article and admire of the writers and authors like you:) It's a very nice writing piece! Keep up the excellent work! Yours forever, proof-reading.services online