Day 5 on Jam Cruise is the last day, or night, or however you want to cut it up. I was still up that morning hearing Brock Butler on the Pool Deck and slept from about 7:30am-12:15pm. I set an alarm to get me up because there was something I definitely did not want to miss - I had a rehearsal with Wyllys for a special Phishy performance later that afternoon. I showed up at Wade's room (aka Wyllys) and we discussed ideas for how to perform the Phish classic Sanity.

I was invited to participate in the Wyllys/Brock collaboration by Scott Bernstein of Hidden track. I had never met Wade or Brock before Jam Cruise 9. Wade has a strong personality, and I knew I loved the guy right away. He and I share a passion for music, especially Phish, and he isn't afraid to say "fuck the haters." I had fun hangin with Wade for the next couple of hours. We went to artist signing to track down a few artists who were going to help him out in his set. 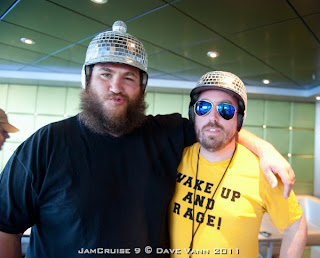 I tried to convince Tony Hall to play Trey Anastasio band songs w/ Zach Deputy later that night in the Jam Room. Tony actually showed Zach the chords to "Money Love and Change" right in front of me and Zach said he would like to work in First Tube somehow later that night. It ended up not happening, but it was still cool to see Tony and Zach interact.

The rest of the afternoon was enjoyed on the pool deck waiting for my big debut as a backup dancer and singer for Brock and Wyllys. It was such a thrill and I will never forget it. Check out the video:

Every year Jam Cruise has an Awards Show, to recognize cruisers and artists who were standouts. Austin Michelle + Crew won "best dressed" and Brandon got the "perpetual motion" award. I was proud friends of mine were recognized for their awesomeness. I say it over and over again - there are many things not on the schedule that make Jam Cruise special, and more than anything else its the people who go on Jam Cruise that make the trip amazing.

After the awards show I checked out Garage A Trois in Zebra lounge. Some friends have said that set was their favorite of the week, but I was tired and I was not that into it. I would have paid $1,000 for a foot massage at that point.

The last night of Jam Cruise was an official theme night. For Jungle Boogie I was in full disco helmet, jacket, and pants. The whole boat was decked out once again in their sharpest disco gear. 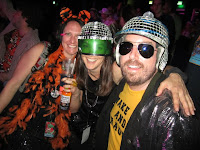 The Rhythm Devils played in the Theater and again they sounded great. I took the opportunity to enjoy most of the set in a plush chair and rest my feet. I have to admit, my dogs were barking after raging all week. At the Rhythm Devil's set I made the best trade I have made in quite a while. I traded my Colorado friend Susi the visor disco helmet in exchange for a pair of capes. Susi is going to make a custom cape for me, and also make one for my baby who is due June 26. The baby rager will be looking sharp! (Yup, im gonna be a daddy this Summer!) 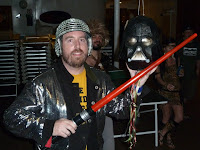 I got to catch almost all of Lotus on pool deck. Mike was ripping on guitar and I took out my ear plugs for one of the first times on the voyage to get rocked. I loved it.

After the Lotus set ended the time had finally come for us to destroy the Darth Vader pinata. I hung it on the pool deck and had been gathering candy, condoms, toys, buttons, stickers, glitter, and other random fun things all week to put in the pinata. I blindfolded and spun around 3 Touch of Class girls - Lauren Y, then Lalia, and finally tiny Hillary broke open Darth Vader with a lighsaber. A crowd decended like vulures to get the goodies. It was a hilarious scene and I think a Jam Cruise pinata tradition has started. 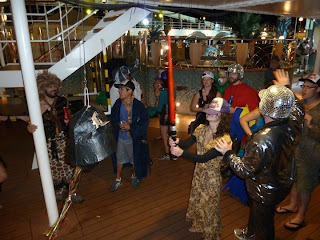 The Disco and jam rooms shut down a little early by Jam Cruise standards. There was no music left at 5am and we were racing towards the port at Ft. Lauderdale. The worst part of Jam Cruise is certainly the end, getting off the boat. No one has slept for days and some don't stop partying until they set foot on land and go through customs. Overall getting off the boat was better than last year and there were no problems for passengers getting off.

Once off the boat I joked that I instantly lose power from the energy crystal they keep on the MSC Poesia to keep us dancing all week. The scene at the airport was a sad sight of weary jam cruisers sleeping on the floor at the terminal waiting for their flights to take us back to reality.

My second Jam Cruise has solidified my opinion that there is no better vacation than Jam Cruise for a music addict like me. Its my favorite, and I never want to miss another one. You can pre-book here. If its your first time on Jam Cruise, please use my real name as a referral. There is nothing to do now but plan for Jam Cruise 10. See you next year!

Want more? Check out Dave Vann's amazing photo gallery of Jam Cruise 9!
Posted by the joker at 11:11 AM

Love how you've discovered a new trick with the pictures/text layout.

I can't believe the joker is going to have a baby. now I understand why he was covering his abs with that apron.

Dude, I've got a reputation on PT to uphold as a "not-giver." You're making me look bad. You'll have to tell everyone I stole the helmet. Yah, THAT's what happened! ;-)

Always say I'll be there but havent made it to a jam cruise yet. 2012 will def be the year I grow some nuts and get on board. Only question is the pre-booking. It says you can recieve a refund of your deposit within 30 days of the official JC10 annoucement? What time of year is the official JC10 annoucement and do they have the artist that will be playing at that time?

The official jam cruise announcement is traditionally known in early may, usually there is a party at the second weekend of jazz fest and it's announced.

Of course you can count on galactic and Karl denson plus a lot of funk on the boat. You won't believe me, bit the lineup really doesn't matter. The magic of jam cruise isn't on the schedule.