The other day someone sent me the link to the STS9 video/interview on CNN.com. I think it made me realize how far Sound Tribe Sector 9 has come and made me reminiscence a little bit.

I have compiled a mix of my favorite STS9 performances. This is a mix of songs that made a big impact on me at the actual show- the songs that I was talking about the next day. STS9 in 2008 is favoring more of their hip-hop/glitch influenced sound...this mix of performances of the '05-'07 era favors songs that have Hunter's long guitar lines in focus.

RoyGbiv>Monkey Music (Vegoose '05, House of Blues, Late night)-
Roygbiv is actually a Boards of Canada cover, but I think that the STS9 version is better. This was played for the encore of the late night show at the 2005 Vegoose at the House of Blues. I love the long melodic lines in Roygbiv and the simplicity of the guitar line in Monkey Music.

Late night Vegoose '05 is a memorable show for me because it was a show I went to on my own after Pauly decided to get some rest- it started at 1am. I was very excited to see STS9 that night, and there were a lot of kids looking for extras to the show. I ended up selling my ticket to a kid from Truckee, CA. We were in assigned seats on the first row of the balcony- before the show started he was looking for his girlfriend in the crowd on the floor. We were able to find her by making bird calls from the balcony. It was a very fun show and many of the stories you kinda had to be there. The whole show and especially this encore was in heavy rotation on my iPod for months afterward.

F.Word (The Fillmore, Denver, Jan '06)
According to a friend of mine who has been seeing STS9 a lot longer than I have F.Word started out as "jam in F". I remember never paying much attention to this song until this show; something in it that night clicked in me. I love Hunter's guitar in this version...F.Word makes me think of a lot of skiing and good times in Colorado every time I listen to it.

Ramone & Emiglio (9/06 The Fox Theater, Boulder)
The Fox 9/8/06 was the night before STS9's first time headlining Red Rocks. They played a lot of older songs that night, and this is one of my favorites. Ramone & Emiglio is my favorite song on Season's '01 (the first STS9 disc I ever got). '01-'04 versions of this song often clocked in at over 20 minutes; this version is tightened up without losing any of its muscle.


Music,Us (9/06 Red Rocks)
As many of you know, Red Rocks is a beautiful place and for me Music, Us seems to fit well with Red Rocks. Music, Us is my favorite off of Artifact and it was a great feeling to hear it at Red Rocks. Interestingly enough, this is the only song in the mix that features (sampled) vocals.

Orbital (Vegoose '06, The Hard Rock Casino, Late Night show)
This is the infamous "Disco Santa" show...I wore a Santa suit to the show with glitter and a disco ball on my cap. Pauly and Change 100 left at setbreak, and during the first part of the second set I ended up dancing with some kids dressed up as Ziggy Stardust, Rainbow Brite, and Alice in Wonderland...those 3 are now some of my best friends, and we met during this performance of Orbital. 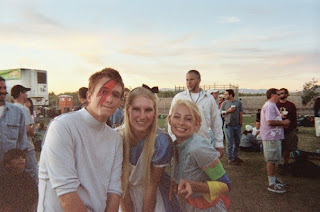 Water Song (Boulder Theater, 3/07, night 5 of the 5 night run)
In spring of '07 I went to Langerado and then came back to Colorado where STS9 had decided to put on a run of 5 nights at the Boulder Theater. I ended up making it to 3 out of the 5. Interestingly enough, this Water Song is one of my favorites but it is in the middle of a set of glitchy shit that I hated. Water Song is a great performance and for me it was a crazy night- we were also celebrating St. Patrick's day.
Posted by the joker at 4:20 PM

Email ThisBlogThis!Share to TwitterShare to FacebookShare to Pinterest
Labels: STS9