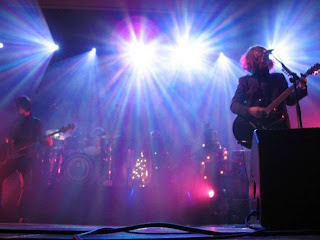 Remember how we told you My Morning Jacket finally had a tour date on the books with a gig at Radio City Music Hall on June 20th? Well, that show sold out in an astounding 22 minutes! Us West Coasters will finally get another taste of Jim James & Co. with an appearance at the Coachella Festival on April 27, and Austin gets their turn at SXSW on March 13th.

Better yet, it's been confirmed that MMJ's new album will hit the shelves on June 10th. Titled Evil Urges, it will be their fifth full-length release. Don't get me wrong, I love me some Okokonos, but I'm starving for some new MMJ tunes.
Posted by change100 at 4:20 PM