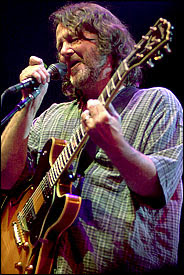 Check out an interview with John Bell called Widespread Panic - Tickling the Truth with JB written by Shane Handler from Glide Magazine. He touches on many topics including charity work, lyrical inspiration, Mikey's passing, and the new blood that Jimmy Herring added to the mix.

As far as taking a back seat, or lightening up on the attack, I think when you get somebody who is as experienced as Jimmy is, you’re working with somebody who is what I think is an appropriate mindset, like somebody like a Carlos Santana or back in the day, Jerry Garcia. You speak with your guitar. You say what you needed to say and you didn’t have to play yourself with a lot of nervous chatter, you already know how to express yourself. So a lot of times, that includes chording and the beautiful melodic chord changes that he came up with. That stuff to me is even harder to achieve than “shredding.” Sometimes it sounds like he’s playing two guitars at once....