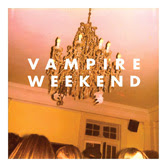 Those heading to Coachella and Bonnaroo can get a taste of Vampire Weekend, now confirmed for both fests. They're also doing a pretty nice little tour right now. So, god damn, I listened to this album 4 and a half times in one day. That's absurd. I'm not the type to go overboard on anything. Now granted, it's just February, but this is the best album I've heard all year. Hold up, it may be the only album from 2008 that I've heard. Not to worry, hailing from NYC, they may be the world's first indierock world music band... durr... or may be not. I heard about these guys a few months ago on some NPR: All Things Considered broadcast - may be it was the informal broadcast where some musicians and critics sat around talking about 2007 music - I liked the snippet I heard then and the album does not disappoint.

Anyhow, I'm always skeptical of NYC bands - I suppose I preordain some level of pretentiousness upon them - too cool for school you know. These guys are cool, but they blend some nice African style rhythm guitar work with some subtle psychedelic pop - then just some straight up pop - it works really well on a few levels. Those who have trouble sharing a dance floor with young sorority girls may be in trouble.

The album is not 100% rock solid - I'll give it a B+, which is high - they may have rushed it a bit to get it out there, but it's still really fucking good.

Here is the link to d/l the album from an over-the-top musicblog (sink-hole.blogspot.com) filled with more d/l's than you could swing a stick at. They're also coming to a town near you - go check them out if you "stole" their music like I did.