Deadheads for Obama Tonight at the Warfield 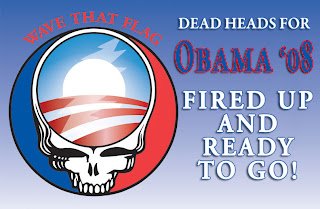 Grateful Dead members Phil Lesh, Mickey Hart, and Bob Weir will reunite this evening for the first time since 2004 for a one-time-only pre-Super Tuesday concert in support of Democratic Presidential candidate Barack Obama. "Deadheads for Obama" happens tonight at 7:30 p.m. at the Warfield Theatre in San Francisco and will also feature Jackie Greene, John Molo and Steve Molitz. All tickets are priced at $35.

Iclips will also be streaming live footage of the event over the interwebs starting tonight at 7:30 p.m. PST.

More info at PhilLesh.net. And if you're like me and live in one of the 24 Super Tuesday states, don't forget to vote tomorrow!
Labels: Bob Weir Grateful Dead Mickey Hart Phil Lesh and Friends

the joker said…
i somehow got on a list somewhere and have been getting messages on my phone from the obama and clinton camps. yesterday i got a call from denver bronco rod smith telling me "i know its superbowl sunday, but dont forget to vote on tuesday." pretty hilarious, im glad they think im an important constituent. hopefully this means that some dead heads, phish heads, and bIsCo kiDDDs are putting down the bong long enough to vote.
2/04/2008 3:37 PM

Irongirl01 said…
I got the email from DeadNet and was going to post it but got scooped by you Change!!!