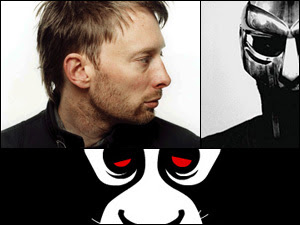 The NPR All Songs Considered podcast is simply a downloadable mp3 of the broadcast, but who can keep track of NPR broadcast schedules. Most of the time host Bob Boilen plays new tracks, or may be plays off a theme; he also does a good job at incorporating audience input. I was real excited to see that they got Thom Yorke to sit down and talk about some of his music and other's that have influenced him - I just can't my fill of Radiohead. Also cool to learn that Thom really digs MF Doom's stuff (as he should), but is a Frank Zappa n00b (as he shouldn't). NPR's show description reads:

Radiohead frontman Thom Yorke shares some of his favorite music with All Songs Considered host Bob Boilen. The two talk about Radiohead's latest work, In Rainbows and listen to some of the artists Yorke admires, including German electronica group Modeselektor, rap collaboration Madvillain, techno duo Autechre and more.

Here is a link to the particular show where you can stream the interview and listen to all the songs Thom plays , otherwise log on and subscribe to the free podcast. If anyone is interested in the Madvillain/MF Doom stuff, I think I can up that for d/l.
Labels: Radiohead