I remember the first time I listened to God Street Wine.  My sophomore year in college, Slutzie lent me his "$1.99 Romances" CD, and I was hooked immediately.  Princess Henrietta, Wendy, Crazy Head - pure genius.    I'd manage to catch GSW live in tiny venues around Boston and New York several times over the next 10 years, including a free outdoor show at Harvard University that actually proved to be much tougher to sneak into than I had expected, where I eventually ended up seeing the band in front of about 100 other fans hanging out on a sunny day outside at Harvard.
Like most of my other favorite bands, God Street Wine would then break up - going their own ways to do grown up things - I guess.  When the legendary Wetlands Preserve in downtown Manhattan was closing however, in 2001, God Street Wine was there to send one of their hometown staple haunts out in style, and I was there with them.  I remember this show for a few reasons - first, it was the week before September 11th, 2001, and second, I was living in the suburbs at the time, but crashed on the couch of my friend Lee, who lived in the City.  I got back to his place around 3am and had to get up at 6am to go to work.  It was worth it, of course.
Nearly 10 years later, when I heard that GSW was back, I immediately called Lee, and we made plans to catch the second of two consecutive weekends of benefits shows.  As I noted in a previous post,  GSW has decided that they have made enough money off their music, and is making everything available for free download.  These shows were benefits for the National Multiple Sclerosis Society.  We got tickets for both nights, and I ventured down to NYC -  by car, bus and train - for a weekend of searing heat and nostalgic jammy rock.
GSW opened the first show with a song, Epilog, which makes me think a lot about what the bands' goal is or was.

The refrain, "I didn't get where I wanted to go, but I did enjoy the ride,"  evoked roars from the crowd, but I'm still debating where exactly the band wanted to go.  Was it super stardom?  Did they want to be U2?  I am pretty sure it's not about money, as evidenced by their decision to allow and encourage the free spreading of their music.  Perhaps family obligations became more important?
Here's what troubles me - these guys clearly LOVE doing what they do.  That's what made these shows so special.  I don't think either night at Irving Plaza was sold out - it was plenty crowded enough to create an energetic vibe, but not so crowded that you had to elbow through wall to wall people to get to the bathroom.  Everyone there was like a participant in a grand celebration - a reunion, which is basically what these shows were after a nine year layoff.  I would guess that well in excess of 90% of the fans saw more than one of the 4 shows in NYC this month - it's that kind of fanbase.  So back to my thought - why walk away?  Maybe other obligations have become more pressing to the band members than toiling 150 nights a year in little bars (after all, lead singer Lo Faber would note on Saturday night that back in the day they wouldn't be able to fill Gramercy Theatre for two nights and Irving Plaza for two nights), but I think - I HOPE  - that I saw a spark in the band that indicated that they still do bask in the rock star glory - the stage lights, the adoring roar of the crowd, and the memories that their music rekindles - and I hope that they'll at least play a few shows each year.  I don't think that's an unlikely scenario either.
Anyway, the shows were special.  A happy gathering of fans so familiar with the band and each other that I recognized many fans on Saturday night from the previous night's show.  On Friday, the highlight for me was a searing Goodnight Gretchen.  Tight, jammy, driving - perfect.  Of course, I also loved Wendy, one of my top 5 favorite GSW songs, which evoked the roaring anthem from the crowd which I quoted in my prior post:  "Well we're drivin' into town, mom, but don't let it trouble ya - my girlfriend's drivin' and she'll stay straight.  We're all going in to see G-S-W, don't expect me home 'till late."   We were situated in the thick of the action, dead center on the floor, about 8 people back.  Another special moment occurred during Waiting For the Tide, when the crowd began singing the ending refrain before the band did (around 5:40 on the link below), and the band could do nothing but smile at each other and enjoy.    You can download and listen to the Friday July 16th show on Archive.org for free.  I really noticed drummer Tom "Tomo" Osander on Friday night - he was, in a word, GLUE, holding everything together incredibly tightly, but I guess he was also a tugboat, pushing and driving the band forward at all times.  Tomo was the standout for me by a long shot.
On Saturday night, we prepartied at Pete's Tavern, right near Irving Plaza, and Ginger Ted joined us for his first GSW show.  Right after we sat down outside, band bassist Dan Pfifer walked by, and we exchanged hellos.  20 minutes later, Lo Faber and Aaron Maxwell, the two frontmen for the band, walked by on the other side of the street.  I noticed them immediately and shouted "Hey - Aaron!"  He stopped and turned, and I spurted out, "Awesome show, we'll see you tonight."  Aaron raised his hand, said "thanks," and walked toward the venue with Lo.  Later, I was thinking to myself what I'd say to the band if I had those 15 seconds back, and if I wasn't yelling across the street.  If I had that one line back, I'd simply tell Lo and Aaron, "Thanks for coming back," and if I could have a drink with them, I'd ask them the question I asked above in this post: Why walk away?  You guys still love this, and the fans still love it.
Saturday night we avoided the floor and were in the corner to the left of the balcony if you were looking out from the stage. This offered us a unique perspective of the role of the lights guy, in this case:  Jeff Volkhausen, who was a few feet away from us, raging at the lighting controls, pumping his fist and singing along to every word, and playing the switches to control the lights like Bevo playing the B3 organ.   It was tremendous to watch - being able to see his fingers flutter on the lighting keys like he was another member of the band.
The band set the tone for the show by opening up with an all time fan favorite, Nightingale.  Snake Eyes into Princess Henrietta (a KD personal favorite) ripped up the second set.  Eventually, the band returned for multiple encores, which included a speech by frontman Lo Faber.  Lo said "If you guys want us to play more shows..." But then the crowd cut him off with a roar that drowned him out.  The ovation extended for more than a minute, as Lo smiled at Aaron, before continuing, asking people to share the music - to spread it around.  This again begs the question - does GSW feel like they need more exposure to keep doing what they are doing?  Do they only want to commit to continuing the band if they can do it on a larger scale?  Is an annual celebration with their fans not enough for them?  Who knows - we will wait and see.

Being a part of the Irving Plaza shows was awesome.  The venue is so small, it was impossible not to notice the interplay between the band members, and between the band and the crowd.  When Lo flubbed lyrics, Aaron would try to guide him back on track and the crowd would applaud.  Lo and Aaron couldn't suppress grins to each other as they wallowed in the spotlights and the screams from the crowd.  I could see Tomo lean forward and nudge his chin up toward the balcony, saying hi to his family, I think.  You just don't get that stuff at big market venues.
Hidden Track  has a tremendous series of reviews about the shows, and I think that this picture they published really sums up the relationship between the God Street Wine fans and the band.  A letter from a fan: 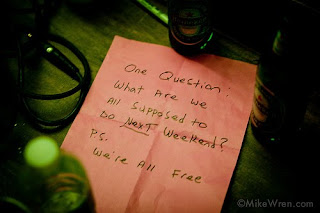 the page should open with a streaming player in the top right corner - it's all the tracks from the Saturday Irving show. the classic hits are: Nightingale, Princess Henrietta, Hellfire, Ballroom and Borderline, while Diana and Feather are also good songs, more radio friendly. Driving West and Snake Eyes are prime deep cuts, and Into the Sea is their vintage epic.

I don't think you'll be disappointed if you listen to that whole show top to bottom - it's downloadable on that same page.

then, there's the Friday show:

same story - between this and the saturday show, you'll get a very good feel for the band. Epilog is their opener with a message - slow. Wendy is one of my top three all time favs. Crazy Head --> Goodnight Gretchen was the best 16 minutes of the weekened. Bring Back the News, Stranger, and Morning Cigarettes are deep cut favorites. Mile by Mile and Waiting for the Tide are classic top tier songs, as is Thirsty
7/20/2010 10:21 PM