The Disco Biscuits = The Wheels Are Shootin' Off 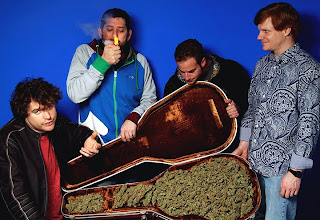 The Disco Biscuits finally released their first studio album since 2002 this last Tuesday.

The album has had mixed reviews. I am not a fan. Its a departure from the way the Biscuits sound at their live shows. The Biscuits played an album release show on Tuesday which was web cast. The show was widely regarded as one of the worst Disco Biscuits shows in memory by many of my friends and online.

They play Albany 2 nights ago. After the show guitarist Jon "Barber" Gutwillig broke his wrist. I have read lots of rumors but there is not a confirmed story on the details of his injury. It seems sketchy to me we don't know how this happened. He was taken to the hospital and had surgery Friday. No word on fast he will be able to recover well enough to play the guitar.

This happened at the beginning of a mini run of shows. Phantasy Tour finds out that Barber hurt himself during the day yesterday and of course goes ape shit. Barber's Facebook status confirms the broken wrist and surgery, saying "if i could try to play i would, pain is excruciating." The band's website announces the Friday night Boston show would be free and featuring special guests. Tonight's (Saturday) show was rescheduled and the Sunday show in Brooklyn will still go on and Tom Hamilton from Brothers Past will fill in.

Last night at the House of Blues in Boston, the Biscuits start out the first set as a trio- bass, drums and keys. They play with the guitar player from RAQ for part of the set and finish the set with both the RAQ guitarist and the guitarist from Indobox.

After 45 minutes at set break the crowd is told that "due to technical difficulties the show is over." I do not have confirmed reports of what really happened, but there are rumors that the fire marshal or police stopped the show because of pot smoking backstage. Check out the full account of the show at Hidden Track.

To keep up with this story and to read some ridiculous discussion, check phantasy tour. Who knows what the truth is, but it is certainly looking like a tough couple of days for the band. The Disco Biscuits are scheduled to headline Red Rocks in 71 days on May 30.
Posted by the joker at 4:20 AM