Jay Z played the Pepsi Center last night. I was there. About 10 days ago it was announced that STS9 would open with a PA set and have a limited number of discounted tickets to sell to the show. After service charges the ticket came to about $20. Most everyone I know that is a live music fan in Denver jumped on the opportunity.

I got this text from a friend that pretty much sums up the crowd: "Our section is half girls in clubwear and stillettos and half tribe kidz. During breaks everyone just kinda looks at each other like zoo animals."

STS9 opened the show at 7pm and their PA set was roughly 50 minutes long. It was obvious who was there for STS9 and who had no idea who they were. I was up in the 300 section along with all the other kids who had bought tickets through STS9. A friend of mine who was down in the 100 level reported that STS9 was getting Boo's from some of the crowd. Ouch.

Next came Trey Songz...a really bad R&B artist. Most of the STS9 fans took the opportunity to have a smoke break or get a beer during this set. 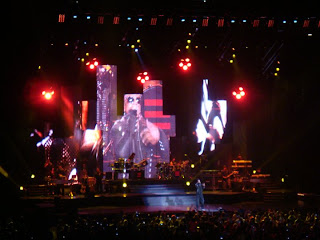 Jay-Z came out acting the baller rap star you would expect. I thought the sound in the 300 level was unlistenable. Jay Z had a 10 piece band behind him, but much of the time I could not hear the majority of them. Jay Z brough out another rapper- Young Jezzy - for many songs. I was excited for their version of 99 Problems but to me it just sounded like 2 men yelling. I couldn't make out the words. Empire State of mind was definitely the highlight, before I left early. I am glad I went though- the people watching alone was worth $20.
Posted by the joker at 4:20 AM

Run This Town
Diamonds from Sierra Leone (Remix)
On To The Next One
D.O.A. (Death of Auto-Tune)
U Don't Know
99 Problems
Show Me What You Got
I Just Wanna Love U (Give It 2 Me)
I Wanna Rock (Snoop Dogg remix)
Jigga My Nigga
Hovi Baby
Nigga What, Nigga Who (Originator 99)
Public Service Announcement
Heart of the City (Ain't No Love)
Dear Summer
Already Home
Empire State of Mind
Real As It Gets (featuring Young Jeezy)
My President Is Black featuring Young Jeezy
Dirt Off Your Shoulder
Swagga Like Us
Thank You
Fiesta Remix
Excuse Me Miss, La-La-La [Excuse Me Miss Again]
Venus Vs. Mars
'03 Bonnie & Clyde
Ain't No Nigga
The Best of Me Remix
Money Ain't a Thang
Lucifer
Where I'm From
Some People Hate, Hate
Can I Get A...
Big Pimpin'
Hard Knock Life (Ghetto Anthem)

Thanks for posting this. I was wondering what Jay-Z fans would think of Tribe and it's pretty whack that they got booed. Those people have no idea about the waves STS9 are making in the jam and electronic scenes, especially in Colorado. I'm glad Tribe had a decent amount of supporters who showed up though.