The PT Thread of the Week: Big Booty and a Vial of Acid 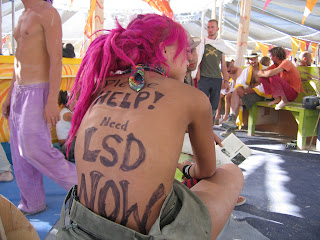 BTreotch stumbled upon this gem on PT which I'm calling... Big Booty and a Vial of Acid.

Originally posted by funky_clavichord, he weaves his sullen story throughout the thread. It reminded me of a Shakespearean tragedy -- our protagonist falls for the wrong girl who has rather scrumptious ass, he gets his heart brutally broken, takes a roadtrip with an emo kid (who happens to be long-dicking his ex-girlfriend), ends up at a Panic show, scores a vial from a wook in the lot, trips balls, emo kid freaks out and thinks he's in the Matrix, their car gets pulled over by cops, and... well, I won't ruin the rest of the story. Read it here.

Oh, and while you are at it, check out some of these hysterical comments on the Phish/Genesis video that I uploaded the other day.
Posted by Pauly at 1:09 PM

i enjoyed the funky_clavichord story very much. i hope we can kick it with him in the atlanta shows.