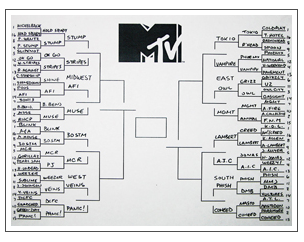 As I posted last week, MTV is doing a "Musical March Madness". Last week Phish was up against Dave Matthews which we won because of your support. But now Phish may have met their match unless you help again. Phish has even posted a link on their official Facebook page asking all phans to:

Phish vs. Coheed and Cambria
"Even with Panic! at the Disco and the Young Veins going at it elsewhere in the tournament, the biggest showdown of the Sweet 16 is right here. Perhaps anticipating the match-up, the hardcore fans were already building a case for their favorites in the middle of second round voting. But which group of fans will rally stronger to put their favorite group over the top?"

We are down in the poll, Phans... but remember: PHISH.ALWAYS.WINS!
VOTE PHISH
Posted by jonas0tt0 at 4:20 AM

phish is great and all, but its f'in MTV, who cares? except brownie..

YOU PLAY TO WIN THE GAME

Who the fuck is coheed and cambria? and why do they think they can beat phish?

I heard the cambria fans were cheating using a program called "hide my id" which allows them to vote multiple times. This explains the huge 8 point surge between 2am and 8 am last night.

Their band sucks so hardcore that they have to cheat to win. We can still pwn these tools.

the mighty phish has fallen.