On the Cusp of the Summer Tour Annoucement - Alpine Valley Rumblings 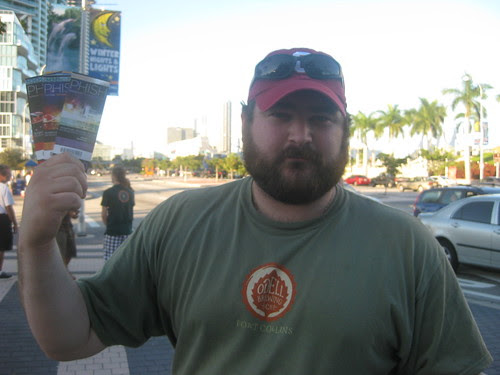 Would you buy an extra from this dude?
Time to dust off those empty nitrous tanks and hit your buddy up for a refill!

We all know that the Phish will return to Brahorado and that Telluride is in the bag. One of our trusted sources (who was right in the past about Hampton reunion, Red Rocks, and Fenway) mentioned that the boys will be throwing down for two nights at Alpine Valley. He said the "13th and 14th" and we gotta assume he means August, which would have Phish going left to right (West to East for your directionally-challenged burners). So you have to assume the Phish carnival of freaks will be invading the West Coast in late July and early August (umm... the Gorge, perhaps the Greek). Yikes, Colorado to Wisconsin in two days? That's a long haul. Then again, Phish had scheduled Gorge > Chicago last summer.

Maybe our guy means July 13-14? (Editor's Note: Could also mean June 13-14 since Phish will be splitting up summer tour again into 2 legs.)

By the way, that's our buddy Wildo in the photo above. He was hustling his extras in from of AAA during the Miami run. If you ever see him in the lot, we here at Coventry vouch for his sanity.
Posted by Pauly at 4:20 AM

seems like a lot of poeple out there think there is going to be some june dates...

FWIW, if it's the 13th and 14th, then it has to be in August, because Alpine only has shows on Friday, Saturday or Sunday nights in the summer. August would be a Friday and Saturday, which fits.

At least 3 nights at the Greek n Berkeley pre-Telluride. Book it.

4 nights at Deer Creek is a wet dream, but highly unlikely. 2 or 3 is much more realistic.

Dr. Pauly, any whispers about SoCal dates or are they going to screw us again and make us wait until another festival at Indio? Hollywood Bowl would be perfect.

Glad to hear that Coventry vouches for my sanity, my parents and the gnomes that live in my closet think otherwise!

For selfish reasons, I'm hoping that Phish @ the Gorge is the same weekend as SCI @ RR, that way I have a "reason" to miss SCI at the rocks without losing my SCI lot cred.