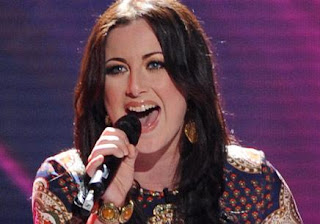 It was a dark day on American Idol yesterday, when millions of texting teens elected to cast their votes for Dreadlock Boy Jason Castro--whose performance of the Andrew Lloyd Webber ballad "Memory" was a disaster of Chernobyl-esque proportions-- instead of Irish lass Carly Smithson, the night's only real standout performer with a soulful rendition of the title song from "Jesus Christ Superstar.' Smithson was sent home, and Idol '08 is now down to its final five contestants: Castro, singer-songwriter Brooke White, R&B diva Syesha Mercado, Boy Wonder David Archuleta, and rocker David Cook, who suffered his first serious mis-step this week, performing "The Music of the Night" from Phantom of the Opera, instead of the dozens of other songs in the ALW catalog that were more appropriate for him.