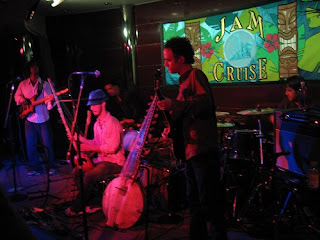 Toubab Krewe at Jam Cruise
The boys from Toubab Krewe are kicking off the second leg of their Spring tour. They will be in the Pacific Northwest playing shows in Seattle and Portland, before making their way to California, the Southwest, and eventually New Orleans for Jazz Fest. The band will close out their tour in the Northeast.

During this tour, Toubab Krewe will have a special guest... Rayna Gellert on fiddle. She's a member of Uncle Earl and will be playing several California shows.

* With Rayna Gellert
** With The Lee Boys opening