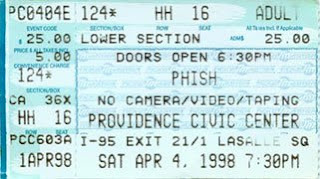 I still can't believe that this epic show was ten years ago today.

After two sizzling shows on Long Island, the party moved to Rhode Island for the last two nights of the infamous Island shows. 4.4.98 sticks out among the pack for several reasons particularly that smoking 2001 and a rare Brother (which included a shortened Brother Reprise).

out of all the 2001's, the 4/4/98 version may be my favorite. the segue into brother makes it that much better. somewhere along the way I started calling this version "battlestar galactifunk". I guess it is kind of fitting now that the final season of the new version of Battlestar Galactica starts tonight, but i digress.