The Wood Brothers with Carsie Blanton in L.A. 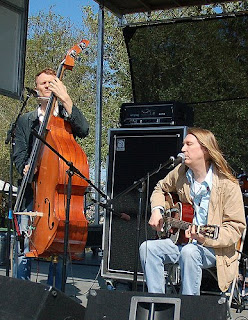 The Wood Brothers at Langerado (2008)
Los Angeles is a fickle music city and this is coming from a New Yorker that loved the ability to walk into The Wetlands, CBGBs, and The Detour (when they existed) to see a random band on any random night. L.A. is the West Coast head quarters (and in some instance the main office) for several major and independent record companies and labels which means that it's not uncommon to see a horde of music industry types at concerts which means lots of schmoozing and talking at the bar in the back during the show.

The best part of the L.A. music scene are the several high end venues to see a concert in addition to the dozens and dozens of other venues including medium sized spaces and tiny little clubs that are peppered all around town. The availability of live music allows you to catch local acts, well as local as local gets in L.A., which is to say those are musicians that grew up and formed their bands outside of L.A. and then moved to L.A. to further their careers.

Anyway, over the last few years, I caught several kick ass shows at different venues in L.A. such as The Knitting Factory, The Wiltern Theatre, 14 Below, The Greek Theatre, and the House of Blues. I finally checked out a venue called The Hotel Cafe. Change100 had been there several times before and the guy who took her to the Prom happened to own it.

Anyway, I was there to see The Wood Brothers. They are two amazing musicians that I've had the luxury of catching their shows in New York City and at festivals like Bonnaroo and Langerado. I love the concept of two guys play an acoustic bass and guitar, although Oliver breaks out the electric depending on the song. I last saw them at Langerado and it was one of the highlights of that day despite the swirling winds. The above photo was taken at Langerado by Otis.

The Wood Brothers were only playing one set and we tried to get there early. We luckily found street parking around the corner in front of a head shop on Hollywood Blvd. The Hotel Cafe is a tiny venue and there were maybe 200 people there at the most.

When we arrived, Carsie Blanton was in the middle of her set. She's a Philly-based singer/songwriter that had a curly afro and wore cowboy boats. Her music was folksy-cute with kitschy lyrics. Her songs could have come right off of the Juno soundtrack such as Gutsy and Smart, which stood out. After her set she walked right past me and I realized that she was tiny.

The Wood Brothers came on at 8pm exactly. They played an hour long set and an encore. They played a mixture of tunes from their new album Loaded and their previous one Ways Not to Lose.

Here's an incomplete (and out of order) setlist...

One More Day, Luckiest Man, Glad, Loaded, Postcards from Hell, Atlas, Where My Baby Might Be

Encore: Make Me a Pallet on Your Floor (with Carsie Blanton on vocals)

Since the venue was so small, we were very close to the action, which made the show even more intimate sort of like a show at Tonic in NYC. The crowd was a mixed bag of folks with a few hippies and wookies dancing around in the back and a couple of drunk hipsters talking behind us. Overall, it was a solid show and perfect for that venue. I expected the show to be sold out and was sort of surprised that so many people missed out on The Wood Brothers. But then again, it was the eve before Coachella and everyone was either resting up for the long weekend or checking out Rilo Kiley's gig at The Glass House.