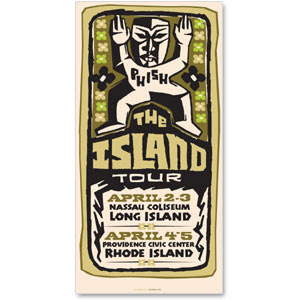 Ten years ago today Phish began one of the greatest runs of shows ever: The Island Tour. Phish was in rehearsals before recording "Story of the Ghost" and wanted to get out to do a few shows- "The Island Tour" is so named because of shows in Long Island and Rhode Island. 4/2/98 ,4/3/98 ,4/4/98, and 4/5/98 are four of my favorite shows...too bad I was not there personally to witness. Kevin Shapiro writes about 4/2:

"Highlights of these shows are too many to list in detail and will be rediscovered time and again listening to these soundboard recordings. Even the Cliff's Notes are lengthy and are covered at phish.com in the April, 1998 installment of This Month In Phish History. Worthy of extra mention from April 2nd is Stash, with a beautiful, sometimes dark jam that erupted into an improvised staccato melody that highlighted the first set and perhaps the entire outing. After ending set one on a high note "for the sake of contrast and composition," Phish launched into set two, which featured, among other gems, the first Birds of a Feather. Wolfman's Brother > Sneakin' Sally Thru the Alley ended in a transcendent jam that resolved into the first Frankie Says. A deep space, depraved Twist jam is another very high point of the opening night."

Thankfully, you can download the entire run from livephish.com. You can also practically watch the whole run of shows thanks to YouTube and silverchair97.