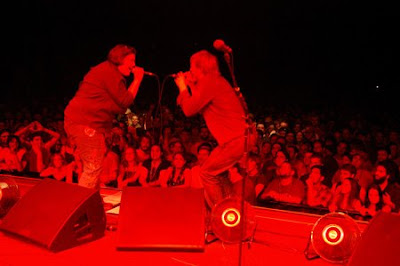 Encore: Sneaking Sally Through the Alley2

* * * * *
Yep, I was there. Weird night for sure. No Kuroda on lights. Trey doing Jay-Z covers. Little did I know that shortly after those shows, Phish would make the decision to break up.

Anyway, here's what I wrote on Tao of Pauly a couple of hours after that show ended...

I got in early and snagged a great seat. General admission shows are cool if you get there early, which I did, two hours before show time. I found a perfect seat right by Page and settled down. I was solo and got chummy with the guy next to me, a cool Deadhead from Michigan. We also had some cool people in our section while is an important factor to enjoying the show. One guy near me was experiencing his first show and he had a blast.

There were two signs/sheets that phans made. One hung from the upper deck and said: Fluffhead. I would love to see Fluffhead. The other sign hung across from me on Mike's side of the stage... Funkify your life!

First set was mediocre with some great moments. AC/DC Bag was sweet. MoMA Dance was highly funky and smokin' at the same time. I was shocked to actual hear some of my favorite songs. Roggae was a cool selection and I got a flashback of one of the best versions I ever heard.... in Las Vegas in 1998. Stash was solid, but the segue into Timber Ho! was sizzling. The crowd was pumped for that jam, and of course, Phish ended an hour and twenty-five minute set on a hot note. They took a lot of time in between songs, trying to figure out what to play. No setlists, they go out and play by feel.

The second set opened up with a smooth 46 Days > Drowned > 2001 > Down with Disease > Free. It was one of those things that make Phish shows special. Drowned kicked ass and I loved Page's piano during the monster start to the second set. 2001 was spacy and mellow, but intense, and both the band and the crowd fed off of each other's energy. That was a special highlight. It's something you can't hear on a bootleg, and only experience live.

the second part of Set 2 was interesting... Scent of a Mule > Girls, Grils, Girls > Scent of a Mule... then two new songs. I dig Scent, but the Jay-Z cover was misplaced. OK, Jen Hartswick singing was amazing. i wish she sang on other tunes. Trey can't rap... and showed whey he's a very very very white boy from Vermont. Sure, it was funny, but I was happy that Kid Rock didn't show up.

Then the boys made me feel special. Slave to the Traffic Light is my favorite song, and something they don't play too much. To catch a Vegas Slave was epic for me. It made the show... and the run! I can walk away happy, even if the next two shows suck... whcih they wont.

I called Sneaking Sally a few weeks ago when I posted songs I want to hear in Vegas. It was wishful thinking, but when they busted into it... the crowd was super happy. The did some weird vocal jam at the end with lyrics poking fun at Fishman's dress.

Chris Kuroda was not working the lights this tour. The new light guy was sub par in the first set... but got his shit together in set 2. Overall, the crowd was rambunctious and fun. It was a fun show... and I can't wait for tonight.

i just started re-listening to this show...it is very safe to say that Trey was not sharp that night.

Yeah, he looked pretty wasted. Lots of those oxy-jams where Trey just went off the deep end.