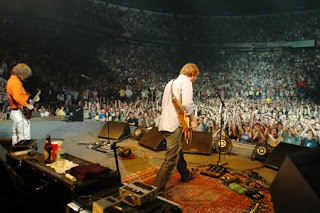 *** Tweezer Reprise had replacement lyrics: "Wont You Step Into The Meatstick"

* * * * *
And yes, I went to the last Phish show ever in Las Vegas. I actually wrote a more in depth recap of the night on my original blog Tao of Pauly...

Wow, another amazing show, with a rowdy crowd... chanting Meatstick during setbreak, with Trey and the boys happy to oblige. Juts got in after partying all night with heads from all over the country. I make new friends fast, especially in Vegas!

I got to the venue super early again, because everyone else realized if they wanted a good seat, they had to wait in line early by 6pm (show beagn at 8:15). I snagged pretty much the same seat in the same section, Sec 119 at the side of the stage, four rows from Page. I had some cool San Diego guys in front of me (yeah, met quite a few quality people from San Diego on my trip) who drove out that morning for the show. To my left was a nice couple from NYC. We were all ready to get lit and get the show going.

Like true rock stars Phish started 45 minutes late to an antsy crowd, everyone wasted from three days of partying without much sleep. They opened with a mellow Bob Marley cover of Soul Shakedown Party before ripping into a rare and hot Halley's Comet. That's Haley's favorite Phish song of course and I gave her a call. Halley's > Tweezer was a sensational segue. Trey appeared to be having too much fun on Tweezer and it was the first point of the night when the band creatively fed off the crowd's energy. The middle jam in Tweezer had a high funk content, before it got spacey and trippy. The ultimate crowd favorite: Sample in a Jar might have been one of the best live versions I have ever seen, with the crowd hanging on every lyric and note, and Trey embracing every moment of the tune. One of the highlights of the entire run for sure.

Piper is a tune that they have been tearing to shreds with some kick ass jams 10 minutes into the song. Again, you never know what direction Piper will go and this time they steam rolled right into a phatty Frankenstein. Fishman showed everyone why they named the band after him with his amazing rendition of the infamous drum solo on Frankenstein. The gang closed the hot first set with David Bowie.... another crowd energy feeder.

After a long set break, I was getting pretty shitty, and I was hoping for a kick ass second set. I already knew that Friday's show... Night 2 was the peak of the Vegas run, so my expectations were not overly high. I just wanted to hear some solid playing and hoped they'd not play too many new songs. The crowd was rambunctious and attempted "the wave" in between chanting the lyrics to Meatstick.

When the boys took the stage the crowd was still chanting the lyrics to Meatstick. After a brief huddle on stage, they began to play Meatstick, which got the enthusiastic crowd grooving. Mike & Trey did the Meatstick dance and afterwards busted into Japanese lyrics for Meatstick, that the band learned from friends in Japan while on tour in 2000. It was a nice homage to Japhans & Japhamily everywhere and to Japan itself... that no matter where you've gone or where you are... memories of the Japan Phish Tour in 2000... lingered everywhere. It was a personal moment and highlight and made the show for me. (Again, if you didn't go see Phish in Japan, it was probably just like a regular tune...)

Normally, I'm not fond of Pebbles & Marbles. However, I always like it when I am not a fan of a song, then a band plays it so well, that I loved every second of it... that happened with Pebbles & Marbles. Man oh man, Trey ripped the shit out of the jam a good 10 minutes in, and I found myself cheering loudly in approval. Caspian was average but Simple was a lot of fun. They slowed it down for the last bit, into a mellow jam that was delicious. I enjoy Friday and I knew some others disagreed. It has slow Trey lyrics followed by several minutes of jamming. A perfect smoke a bowl song.

Then... the boys brought back the desert funk. Ghost was insanely good starting out slow and allowing the funkification of the song to take a life of it's own. Tight was one word I used to describe the song when I jotted it down in my notes. I figured at that point, we'd be due a heavy hitter... and the boys broke out You Enjoy Myself.... which they segued into Tweezer Reprise. During YEM, the crowd went ape shit just before the "Boy, May, God, Shit" part. The crowd was rocking and the boys again fed off of that energy and vibe. Trey fell of the trampoline a few times during that part of YEM and ripped out a sizzling solo right after that incident. Tweezer Reprise had the lyrics switched and Trey replaced the word "Tweezer" with "Meatstick". It was goofy and Trey looked liked he was having a shitload of fun.... something I noticed the entire run.

The only time I saw him dejected was after AC/DC Bag the first night when he admittedly looked upset with his shaky performance after he admitted to the crowd, "That sucked."

The encore was a nice double dip of Wolfman's Brother, one of my favorite songs of all time and Squirming Coil ensuing. Wolfman's had a few "Fluffhead" and "Sneaking Sally" and "Simple" teases, and everyone was hoping for Fluffhead to be busted out. Alas, the ended the run with Squirming Coil, and because I was so close to Page, it was awesome to see him on his amazing solo to end Coil. The other members left the stage and left Page alone for five minutes while he played his grand piano. That was special and when he walked off stage, I knew it was over... and that Phish once again proved to me why they are the best live musical act around. To do what they do night after night for twenty plus years is truly amazing. To do it in Las Vegas is a dream come true.

The older I get, the more respect I start to have for Phish (on a larger scale) and I have developed a reluctance to embrace several more popular/mainstream bands that get the spotlight (media, MTV, videos, buzz) and fade away a year or two later, never to be heard from again.... until they resurface fat and broke, on VH1's one hit wonders, a decade later.

They had some moments that rivaled Miami.

And that's all she wrote.