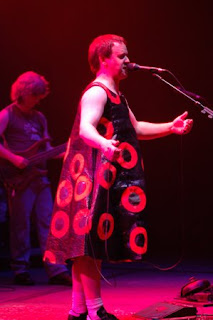 The cow-funk has morphed into the desert funk. That was the better show out of the two!

The first set was one of the best first sets I have ever seen. Not one song that I did not to want to hear. I sat five rows behind Page and my section was very cool. Some Chicago heads and a couple of cool folks from Southern & Northen California. Met one surfer dude from Redondo Beach who kept calling me, "Pauly Braugh!" I met an older Phishy chick from San Fran named Sandy, who hooked me up with some pharmies. She called Gumbo!

The signs I saw hung up on the rafters...

I got there three hours earlier and snagged a great seat. First set was unreal. Rock & Roll is my favorite Velvet Underground tune and Page rocked it out and Mike went off on Boggie On, high funk action on that song. Man, Phish brought the desert funk to everyone.

Possum was high energy and a crowd pleaser. Strange Design was a lovely Page song and Senor's favorite Phish song... the one song he puts on all the mix tapes he made for girls he really liked. And Gumbo was sick! The girl next to me called it... the jam out of Taste was one of the best I have seen in some time. The boys were on and the venue cleaned up the sound compared to the first night.

I called Gotta Jibboo opener. The Twist > Jam was freaky and funky something I'm calling the Vegas Jam. Camel Walk was unexpected. Crowd pleaser = Wilson. Fishman was doing freaky stuff during Love You, with his musical suit. Waves is one of my favorite songs from Round Room. I love Trey's noodling on Waves. Life Boy, Horse > Silent.... equals old school Phish. I was pretty fucked up at that point. Then the boys jammed out a killer Loving Cup.

Mike was the MVP. Page impressed me on Rock & Roll. And Trey ripped the shit out of Taste.

I listened to the show since then and it wasn't as great as I originally thought. I was on definitely on some good shit that night, and might have still be loopy when I wrote the mini-review. Trey had some heady Oxy jams in Waves.