Skip to main content
Labels
Posted by the joker April 10, 2008 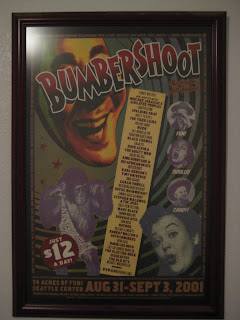 Bumbershoot 2001, artist unknown, Custom Framed 26x38
This is the one that started it all.

In late May of 2001 I had been laid off from an ad agency in Dallas and I wanted to get away for a while. I hastily decided to go on a mini summer tour. I worked for the months of June and July for the 4th and final time at Philmont Scout Ranch in Cimarron, NM . In August I started driving west. I went up through Colorado, Wyoming, Utah, Oregon, and finally Washington. I visited friends but no one was traveling with me. On that trip I saw Ween and Galacic at Red Rocks; partied in Boulder with a friend in law school; visited a friend living in Logan, UT at Utah St. and discovered how weird Mormons can be; saw Galactic in Portland; Ween in Portland; local bands I have forgotten; and finally the big weekend in Seattle at Bumbershoot.

When I was on that trip I didn't have a care in the world. I met some kids drinking beer in the parking lot as I arrived at the Bumbershoot grounds on Friday afternoon. They had a moe. sticker on their car- I chatted them up about music and I ended up hanging out with them the whole weekend. They were from Canada and had mushrooms.

When I look at the Bumbershoot festival poster there are a lot of things that go through my mind- it was one of my greatest road trips. The best performances for me at the festival were Built to Spill, Ween, Ratdog, and David Lee Roth. Actually, I think seeing Diamond Dave in an electric blue jumpsuit sing Van Halen songs while on mushrooms cannot be beat. I also wandered around the Experience Music Project (EMP) after the festival at night...you had to be there but it was a great time.

I was invited to come to Canada with the kids that I met at Bumbershoot. I was game for anything...I probably would have driven clear up to Alaska and found a bus to live in if someone had asked me. I was planning on going until I got a call for an interview to come work for The Wall Street Journal. I drove back home for the interview, got the job, and then woke up a few days later to find out planes had hit the Twin Towers. My life had changed, the world had changed. And I have the poster to remember it by.

This poster is way more than about the music. It is from a time of my life that I didn't know what was around the corner and I didn't worry about that fact. I stuck out across the country and wandered through the Great American West in my car, camped, danced and made new friends.

This poster was bought by calling the Bumbershoot offices and having them mail it to me. It was custom framed in 2002 as a gift from my Mother.
Labels: Bumbershoot The Joker's Posters