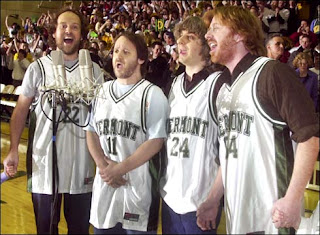 I have been hearing of lot of talk about a Phish reunion from people who don't even like Phish. You know when stuff from the underground leaks into mainstream, it's gotta be interesting news.

I started a rumor on April 1, 2008 about a Phish Reunion. It was an April fools joke which made a lot of Phisheads laugh and pissed a few hardcore fans off. But for a few days, it was fun to think about the possibility of a Phish reunion, even though deep in my heart I knew that they were done for good.

But then Trey got a message from God... to get the band back together... just like in The Blues Bothers.

Phish reunited for one evening to accept a Jammy, but did not play. Phisheads went nuts again trying to figure out from cryptic text messages if they were going to all take the stage and play Fluffhead again.

By then, more rumors began swirling.

Trey mentioned something in Rolling Stone hinting about a Phish reunion..

Then word got out about a new Phish album.

And then this week, Page wrote a letter to Phisheads indicating that the four members of Phish were on the cusp of something.