This was my first ever multi-day music festival. I knew it was going to be impossible for me to see everything and everybody even though host Warren Haynes and Radio WDST and the Mountain Jam IV crew organized the schedule so there was virtually no overlap (except for late nite). My motto for the weekend was pace yourself. I'm a former endurance athlete who now can sit on her butt and play cards for hours on end. I'd need to draw on both those reservoirs to make it thru the weekend.

It was certainly a beautiful location for a festival. Even though I grew up only 35 miles from Hunter Mountain, I only skied it a handful of times. My dad owned a ski shop in Hudson NY thru most of my teen and college years. Hunter awarded us day passes but neighboring Windham Mountain gave my family a free membership and season passes. Since Windham was private at the time it was less crowded and we opted to ski there away from the herds of NYC and NJ residents who made Hunter their stop.

Hunter Mountain is the second highest peak in the Catskills at 4,040 feet. I've hiked parts of the Escarpment trail directly across from Hunter and it was that vista that greeted me every morning when I woke up on my campsite high on the hillside. When I first arrived I had been told that a family of black bears had already broken into someones tent and trashed it rummaging for food. "Roll with it girl" I said to myself. 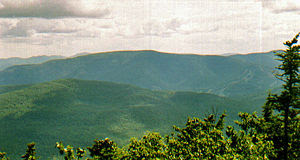 Since I have a lot to still digest, I'm going to start backwards with Mt Jam IV closer's Bob Weir and RatDog.

I: Jam > Help on the Way > Slipknot! > Easy Answers, She Belongs to Me*, Money for Gasoline, Loser+, Loose Lucy > Two Djinn

II: Masters of War@, Friend of the Devil@, Mississippi Half-Step > Samson and Delilah > solos, Lady with a Fan > Terrapin > At a Siding > Terrapin Flyer > Sugar Magnolia
Encore: Ripple
*-with Levon Helm (Drums)
+-with Warren Haynes (Guitar/Vocals); Jay Lane didn't play on "She Belongs to Me"

RatDog was going to have a tall order to fill after the whole mountainside was regaled by Levon Helm's Ramble on the Road. I had told BFF Kim that if I wasn't feeling it I was going to high tail it off the mountain during the second set to beat the impending gridlock. Needless to say I stayed for all but the encore.

I had a perfect stage level spot on the ski slope directly in front of Bob and Kenny Brooks about 30 yards away and it was a clear line of site for me. Right from the get go I was put to the test. BFF Kim is a music teacher but I'm the "pro" at figuring out what song is coming from the opening licks when it comes to Grateful Dead or Max Creek songs. I however will admit I don't know the names to most Ratdog originals other then Two Djinn. On the first Jam I had to say "It's just a Jam" as the band got warmed up. Then I heard the welcoming notes of Help on the way into Slipknot. I wanted a mountain jamming Franklin's Tower but alas it was not to be. Instead the band launched into the Weir/Wassmerman tune Easy Answers. That didn't really do it for me although Bob's voice was strong and solid. 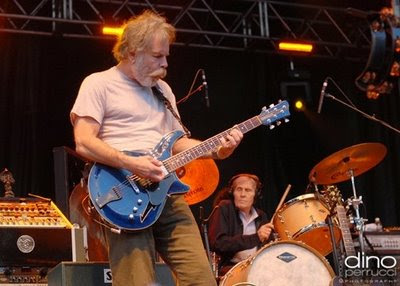 Levon Helm then came back out to play the drums for the Dylan tune She belongs to Me. The band really brought it on this song. When Levon left the stage every member of RatDog except for Kenny Brooks and Jeff Chimenti who were on the far left of the stage reached out to shake his hand. Then it was a RatDog tune Money for Gasoline. Two Grateful Dead tunes followed Loser into Loose Lucy. I was wearing a Full Tilt Poker baseball cap at this point in the weekend. One of the young dudes I was with tapped me on the shoulder and said" "Wow, that is so cool they are playing that tune and you are wearing that hat." Indeed, I can tell the queen of diamonds by the way she shines. And I forgot to mention that the hardest working man in Rock & Roll today and the host with the most Mr Warren Haynes traded verses with Bob on Loser. A fierce Loose Lucy had everyone swiveling their hips before the set closer Two Djinn.

Intermission brought a presentation by the Rex Foundation (the charitable foundation of the Grateful Dead) looking for donations. We were told that the second set was to be a special set that if you donated you'd receive a CD of it or some such thing. Most of the group I was with was younger kids who had just graduated college or who were still in school and most of them just laughed and were like "I can't even afford gas to fill up my car and you want money."

Set II opened with another Dylan cover, Masters of War. From there on out it was a trip down memory lane: Friend of the Devil into Mississippi Half Step into Samson and Delilah . The whole mountain joined in for one big sing-a-long. Bob left the stage while the other members took their turns soloing. When Bob returned and started trading licks I could hear the teaser notes of Terrapin in their jamming. I announced Terrapin to the crew and scored major props when about two minutes later we were greeted with Lady with a Fan: Let my inspiration flow in token rhyme suggesting rhythm.....

A rocking Sugar Magnolia took Set II home. The band exited the stage briefly before returning for a single encore of Ripple. I made my way thru the crowd and down the hill to beat the masses at about 10:30 PM just as the band returned to the stage. I exited out thru the base lodge and jogged to my car while I could still hear the sweet sounds of Ripple. I jumped in my car and drove out of the parking lot and down Rte 23A relishing in all the awesome music I had listened to and been introduced to over the three days of music.

I felt it was a well rounded show. A few posts I've seen were from the Bob haters asking that Warren not bring back RatDog or that they had no business closing the festival. Sure Bob forgot a few lyrics and smacked both sides of his head at one point but his voice sounded clear and strong and I think the song mix appealed to old and new fans alike. The Terrapin was absolutely perfect and it was good to see Mark Karan back in the mix after his long illness. I had to laugh when Kaelin one of my "nephew" Zack's friends nudged me and asked: "Lori, is that Bob Weir?", and I laughed and said "Yes, the dude with the grey beard up front, it sure is?. To which Kaelin replied: "He's old!!!" And I must say even though I was a Bobby girl back in the day, when I saw a really young girl wearing a "I'd still fawk Bobby t-shirt" I was kind of grossed out. I mean even though I and most of my female deadhead friends had a major crush on him when we were younger we were just happy to be spit on from the stage!

There is more yet to come and I will keep checking You tube and the Mountain Jam IV blog for photo's, video and setlists. Hopefully, some of you caught the show on Iclips.
Labels: Bob Weir iclips Levon Helm Mountain Jam IV RatDog