This Week in Phishtory: Deer Creek '04

I am feeling a little nostagic about my trip across the country in '04 that included several Phish Shows. Hard to believe its 4 years ago this week. Here are some of my notes from the Phish Deer Creek '04 shows...you can listen to these at http://www.phishows.com/ , and of course own the soundboard through livephish.com.

Wed 6/23/04
The drive to Deer Creek from Indianapolis is only about 30 minutes, so we got up early, got some supplies and headed to the campsites at Deer Creek. The weather was beautiful and perfect once again- highs in about the 70's and it got down in the 50's at night- cool enough to wear a hoodie.

As we were driving into the campsites, I ran into a guy I met at Bonnaroo and he is friends with a band playing an afterparty in the campsites. He directed us to a awesome campsite, close to shakedown street as well as close to the area the band was going to play later. The afternoon before the show Pauly and I had a great time hanging out, meeting people, drinking some beers and enjoying the weather. Chris and Mer from Dallas came to meet us and we all sit in the Lawn.

Set 1: Llama, Bouncing Around the Room, Bathtub Gin, Ya Mar, Pebbles and Marbles, Army of One, Split Open and Melt

I thought this was a great show, however looking back it might be my least favorite of the tour. But it had its moments. The Halley's Comet -> Crosseyed and Painless -> Slave to the Traffic Light was awesome. There was a huge glowstick war during Halley's. And I got my Bathtub Gin in the first set, so that was fun. Pauly isnt too fond of Waste as an Encore, so we left the show at the encore and beat everyone going out. We walked straight back to the campsites and the party was already going. The band was playing (they played all night) and there was also a balloon tank next to us. I sold a few bloody mary's and white russians, lit some candles, and watched the balloon suckers stumble forth into the night. It was a beautiful night and I passed out sometime in the early morning.

Thurs 6/24/04
Thursday morning I woke up kinda late around 11am. I picked up the camp a little bit, then set up the bloody mary show on shakedown and played some guitar. I had a great time selling and met a lot of cool people. I even traded a bloody mary for a breakfast a guy next to me was selling- scrambled eggs, sausage, and biscuts and gravy. Sometimes its the little things that make your day. That shit was better than waffle house.

Thurs afternoon we went down to the show a little early and got our seats. Pauly and I met up with Cory from Dallas and some of his crew. We had seats on Mike side kinda behind the soundboard and at this show we probably had the coolest most enthusiastic group of people around us all tour (which is saying a lot!). The show Thurs night was hot. The setlist:

Set I: Loving Cup, Cities, Back On The Train, Vultures, My Mind's Got a Mind of its Own, Down With Disease > Rock and Roll

This whole show was amazing start to finish. The Loving Cup opener had everyone singing along. Cities is probably my favorite Phish cover and I had been playing & singing it all afternoon on shakedown. The Down w/Disease>Rock and Roll segue was HUGE.

I went to the bathroom at setbreak...it seemed like time slipped through my hands a little bit and I heard the roar of the crowd while I was still in the lawn and Phish was coming on stage. I started moving toward my seat...and then they opened with Tube, one of Pauly and I's favorties!

Imagine a screaming maniac yelling YES! YES! TUBE! YES! running over people to get down into the pavillion...cause that was me. Antelope was huge also. Marco Esquandolas...OHHHHH to be Prince Caspian with stumps instead of feet...Timber! woa Timber! we've got it simple! cause we've got a band! It was all a big singalong and I loved it.

The party back at the camp was a little more chill than the night before, but EVERYONE was just fukked up. I mean, I had so many weird conversations with people and it was a lot of fun being wasted and talking to wasted people. I even met a woman that makes custom stickers- Including Aqua Teen Hungerforce. She had made little toys of Shake, Frylock, and Meatwad- we had a little show with the action figure toys she had made- I was the voice of meatwad. Maybe you had to be there and all that, but it was hilarious. 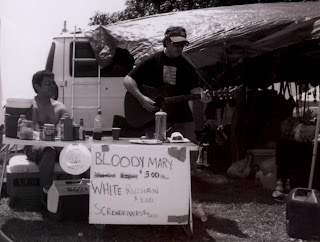 The Joker on Shakedown 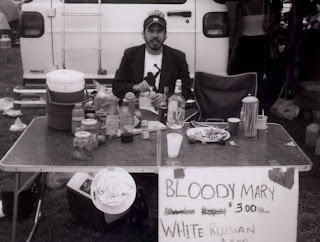 Man those notes were awesome...

Were you guys at Dead Creek? I seem to recall seeing the "bloody mary" guy there with White Russians on the sign. I also remember packing up to leave early one morning and the guy across from the port-o-johns was yelling "super heady hand sanitizer..."

What a friggin' riot.