Skip to main content
Labels
Posted by the joker June 01, 2008

the joker's Thoughts On Festivals 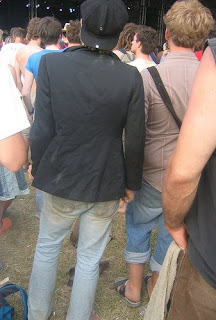 It’s the magical month of June, and festival season is in full swing. I have been reading a lot on the web on this subject as well as chatting with my friends about what they think of all the festivals this year. I wanted to let you know what I think about all of this, which seems to be a little different than a few of the other voices out there. There is a lot of talk about how mass media can ruin a festival like Bonnaroo, or even that it is already ruined because everyone knows about it.

"The best year was '02, now there are all these corporate bands there" seems to be a cool thing to say.

I would like everyone to consider, just for a moment, the flip side: What if Bonnaroo and festivals in general can improve the mass media and culture?

Continuing with Bonnaroo as the example, I believe having Fuse TV at Bonnaroo will help more kids figure out what good music is despite the fact that they live in some shitty place and their parents aren't cool enough to play the Beatles or Grateful Dead for them.

Look, Phish has not been on tour for 4 years. Jerry is long gone. Their music is still around, but I am talking about the culture and learning that develops from going out and camping with a bunch of kids that love music. Ideas are exchanged, music is exchanged, it is a great experience and it is unique. It is easy to go to a show at a club and not talk to anyone new; and in my experience you can be the best music downloader/blogger/boarder on the planet and know a lot about music, but without true interaction with the bands and fellow fans it is pretty meaningless.

It is nearly impossible to go to a festival and not meet someone. Maybe you talk about music, maybe you talk politics. Maybe you sleep together. My point is: you are interacting, and in today’s age that is a good thing.

I grew up in a place that did not offer a lot of "cool music" (Central Texas) and it wasn’t until college that a friend introduced me to Phish and the Grateful Dead and I had a car and could drive to Austin to see bands. I’m a better person because of experiences like Phish tour and my perspective on life is better in part because of adventures traveling to shows and late night experiences at festivals. I have muttered to myself countless times around my corporate office that some people would really benefit from taking mushrooms and gettin' down to some nasty beats sometime...perhaps you have as well.

Many of the best friends I have in my life are because we met somewhere along the way, kindred spirits brought together by the music.

So, back to my argument: If having media at these places gets a few kids that wouldn’t know any better to have the pleasure of seeing a band "jam" and the fun of dancing their cares away at a late night tent, then I think that’s an improvement.

So what if Metallica, Pearl Jam, Jack Johnson etc. etc. are played on the radio/are popular/are corporate and their fans come out to see them? Maybe one of their fans are going to come out to a festival to see them but then gets turned on to something else and has their mind blown? What if someone “lame” camps next to you (the cool kid), but instead of being a snob you are nice to them and share some of what you know? Can a handshake and a hug with some good music turn their life around? I think it can. What if some "lame corporate music fan" has an epiphany about himself somewhere along the way and his broader attitudes are changed?

Not everybody is going to, but someone will.

The record industry is not dead but it is dying; I feel that the pre-packaged band days are becoming fewer and fewer...there is more of an incentive for bands to tour, for people to go to large festivals and dance together and learn from each other. The Internet you are reading this on right now builds community but being together with like-minded people REALLY is community. I think it could be a step in the right direction.

Some hold an us vs. them mentality- don’t ruin "our" scene, don’t ruin "my" band...what if we assimilate the masses and everyone figures out (and I’m quoting Paris Hilton here) that we are all hippies at heart...the world will be a better place.

So bring on the cameras, bring on the clueless RollingStone reporters. Say hi to the Deathcab for Cutie fans and the metal heads. Bring on the Custies. Maybe more people will learn the secret: to surrender to the flow. 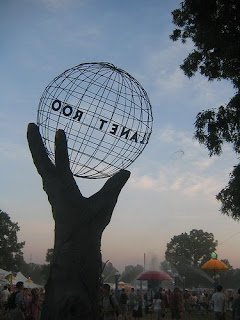 Anonymous said…
I tell you, if I had never gone to that one Griz show in Tampa a few years ago and met BTreotch, then I would have never met you and Pauly at Langerado this year. One thing I can say with assuredness, is ever since knowing BTreotch and in this short time of knowing you and Pauly, I know I can always learn something from you guys and that if I ask a music question, ya'll won't make me feel dumb for not knowing the answer....I love that...