This Week in Phishtory: Alpine Valley '04 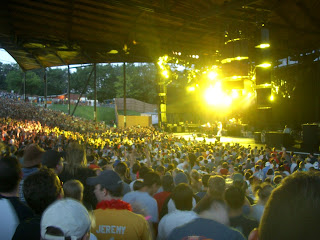 photo credit: Phishpics.net
Today and tomorrow 4 years ago I attended my last regular Phish shows...The only times I saw them after this was Coventry.

Justin over at Live Music Blog posted some excerpts and stories from these shows last week...check that out. Of course you can listen to the whole shows at Phishshows.com.

Here are some of my notes from the tour..I know this may be a long read, if you are pressed for time skip down to my story about the cornfield on 6/26, which is one of my greatest concert adventures ever.
The words I used describing my 6/26/04 show was "What a great experience- this is why I go to Phish shows. This is adventure. A little stupid maybe, but I'm still alive and smiling."

Fri 6/25/04
Friday was probably the toughest day of the whole tour so far. We left the Creek about 9:30, but didnt get to meet up with Jeff in Chicago until about 4:30pm because of HORRIBLE traffic (it was supposed to be about a 3 hour drive to Chicago). I parted ways with Pauly in Chicago at a McDonalds and then rushed to Jeff's to shower and hit the road again to get up to Alpine Valley. It was Friday afternoon, 5 pm. More traffic. We are rushing, rushing, rushing. We finally get to Alpine Valley, meet up with Scott, and its 7:45pm. The band is going to take the stage any moment.

Rush, rush, rush. We walk in and the boys are on stage, we find a place in the lawn. The shows at Alpine were kinda like the Greatest Hits of Phish shows. The setlist:

Encore: Sample In a Jar

I loved getting to hear the Ween cover Roses Are Free in the first set. The Bowie and Wolfman's were great too. But the real fireworks were at the second set. By the way, after 3 songs we stub down to the pav and we had the best seats I have ever had at a phish show that night, dead center about 12 rows back. The whole second set is just classic phish. The YEM>2001>Yem Vocal jam is just sick and you have to listen to it. I would probably rank that as my favorite segue of the whole tour.

6/26- My most Epic day of the Tour.
I woke up around 11am back in Chicago (yep we drove back to Chicago after the first night) and Jeff called some of his friends that were going to the show he knew from work. I met up with them, we got some groceries, and headed back up to Alpine Valley. I made fast friends with the Chicago crew and we cooked out. It was a beautiful afternoon and I decided to go for a walk in the lot. When I came back, the guys parked next to us, also cooking out and doing the exact same thing as us, were busted for smoking pot by undercover cops and each got a $460 fine! I couldn't believe it. That so could have been me. Luck prevails again.

The lot scene at Alpine can be summed up as this: Hot midwestern girls everywhere, everyone looking for drugs, and no one selling drugs. I was lucky and saw a guy I met in Saratoga and he hooked me up with a mushroom chocolate. This is important because it comes in big time later.

At some point in the lot I met Mike driving around on a golf cart. Cool to shake his hand- my hand is bigger than his, which surprised me that a hand smaller than mine can drop such bombs.

The show was OFF THE HOOK. Here it is:

*First time played in concert.
**After Stash, Trey and Mike rearrange their mic stands in jest.

Im gonna go on the record and say that this Set I was my favorite Set I of the tour. Everything was great. I started tripping hard during Stash and by the time Divided Sky came around I was having a spiritual moment with the music. I also loved the Wilson -> Funky Bitch, Character Zero. Great stuff.

At setbreak is when things started getting really crazy. The crowd was HUGE that night, probably the biggest of the tour. The push to the restrooms at setbreak was practically unbearable. It took me about 20 minutes of being packed into a crowd INCHING along to get to the restrooms. Now I gotta tell you this was a scene. There are about 200 people crammed into the restrooms waiting to take a piss, there are guys and girls everywhere outside shouting, and people are pissing anywhere there was a tree, bush or corner. I just waited in line and took this crazy scene in. Remember I am tripping this whole time.

As I walk out of the restroom, security comes over and tries to get people to stop pissing in the trees and on the fence and everywhere else. Some people ran, others ignored them. What can 5 security guards do to 100 people pissing on a fence? Then, crazy shit really went down. I see people getting kicked out or escorted out. More shouting. Then someone turns and pisses on a security guard that was telling him to stop. Then, seizing the moment, 5 or 6 people crash the gate (the show was sold out) and run into the crowd. Most get away but one person got wrestled to the ground by 2 security guards. My head is a mess and its quite a lot to take this whole thing in...finally get back to my seat, and about 5 minutes later the second set starts.

Set 2 was just SICK! Ive never heard a better Boogie On-> Jam. Ghost>Free was great, even Friday was good. Piper. Hood. This show had all the crowd interaction songs in it and the crowd was loud. A great great show.

After the show instead of going to my car, I walk to the hotel/resort that is behind Alpine Valley where the Dallas crew was staying and I was going to party & stay with them for the night. I got to the hotel and it is 100% people who had been at the show, and it is a 100% party. People dancing, drinking, running around, you name it, it was there. I find the Dallas crew and hang out for a little bit to let the traffic die down until I thought it would be good to move my car from the main lot back to the hotel.

It was supposed to be about a mile walk to my car from the resort- Doughboy offered to drive me but I said I wanted to walk because 1) it might sober me up a little bit and 2) it would be fun to go though the lots at my last normal Phish show. My reasoning ended up being correct, but I had NO idea what I was in for next.

I start out walking up this hill on a paved road. The road seems to be going away from the lots. I can hear the people partying in the lots and see all the firewords that people are setting off. I'm still kinda tripping and it really was a beautiful scene. Its really dark out, the half moon looked errie with a wisp of cloud around it, the stars are out, and I am completely by myself walking in the night. I decide that maybe the road will take me further out than I want to go, so I decide to take the most direct route to the fireworks, which appears to be just through some woods.

I push through the brush (which was pretty thick) and then all of a sudden I am in a cornfield. Im talking like a Field of Dreams cornfield. It was the trippiest thing ever. I am sorta scared, sort of amazed, sort of thinking that this is just a special moment. There is no one else around in this huge cornfield and the corn stalks are about waist high.

I start making my way though the field, watching the fireworks, and tripping out at the fireflies that would buzz past me every once in a while, making me wonder if im losing it completely or not or if there is really a floating glowstick.

After being in the corn for about 10-15 minutes I see in the distance 2 figures. Of course with my impared vision its dark and I'm not really sure what I see. I'm kinda scared that I might get shot at or arrested for trespassing.

The figures get closer and I call out to them "Do you see me?" they reply relunctantly "Yes...Friend or Foe?"

After a moment of hesitation we figure out that we are all doing the same thing, all spun out phish kids lost in a cornfield trying to get back to our cars. Roddick and Bill from Indiana were my new companions in this adventure, and they had a bottle of Whiskey to keep us warm.

By the time we get through the cornfield, out pants are completely soaked from all the water coming off the corn (I guess the crop had just been watered). Out of the cornfield, into more brush. We can see and hear the lots still, it seems like they are not very far away. Into the brush and trees we go.

Now, imagine you are in brush so thick you can't move through it. And its so dark you can't see 1 foot in front of you. Blair Witch times ten. We move through the woods. Down a hill. Up a hill. More brush. We are in the brush for 30-45 minutes.

Then our moment of Zen. We can see the parking lot. I can actually see my car.

But there is one more thing- a chain link fence with slanted barb wire at the top. The fence was there to keep people out of the cornfield, and now ironically it is keeping us in. We try to climb over but can't. Nothing to do but to walk the fence line until we finally get out of the brush and into the parking lot.

We finally make it around the fence and are at an entrance to the Alpine Valley parking. Celebration. Rejoicing. We all three hug and laugh and look at each other in the light for the first and last time.

After an hour and a half I get in my car, drive (on the road this time) to the resort (which was about a 5 minute drive). The party is still going, actually I think it was just getting started. We drink, we dance, we meet people from all over the country. I passed out on the floor of the Dallas Crew's room at about 5 am. What a night.

I freakin' love reading your stories about show adventures!!!! Had me laughin'!